By newsroom on September 4, 2018Comments Off on Nike Takes a Knee with Colin Kaepernick for 30th Anniversary Just Do It Campaign

“Believe in something. Even if it means sacrificing everything.”

Nike is backing former NFL quarterback Colin Kaepernick, the American footballer who famously began ‘taking a knee’ during the US anthem in order to protest police violence against African Americans and racial injustice.

On September 3, Kaepernick tweeted out a monochrome image of himself bearing the words “Believe in something. Even if it means sacrificing everything.”

Kaepernick will join Nike regulars like Serena Williams as part of a 30th anniversary celebration of the brand’s iconic ‘Just Do It’ slogan, which was coined in 1988 by Wieden + Kennedy. 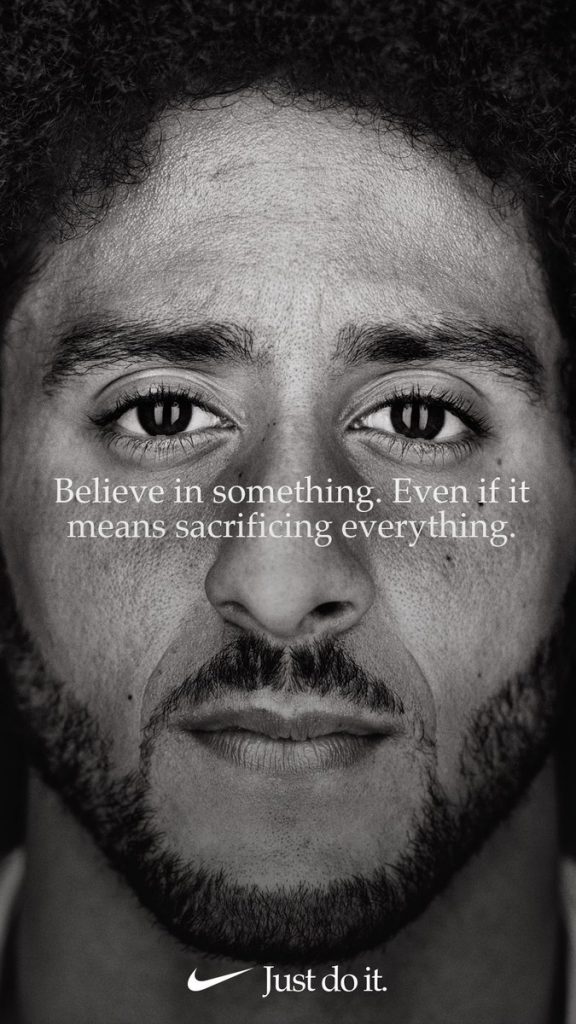 Williams shared her approval for the new Nike campaign and her support for Kaepernick and his fellow footballer Eric Reid.

“I think every athlete, every human, and definitely every African American should be completely grateful and honoured how Colin and Eric are doing so much more for the greater good, so to say,” Williams said. “They really use their platform in ways that is really unfathomable.”

Although Kaepernick has not played for the NFL since 2016, the impact of his gesture has been felt both on the field and across American political discourse.

Kaepernick is currently suing the NFL for conspiring to keep him out of the league following his controversial decision to ‘take the knee’ – he has not been signed by an NFL team since 2017. Where things get interesting for Nike and the NFL is that according to ESPN, Nike signed the sport star in 2011 and although they have not featured him in any materials over the past two years they have continued to pay him. US sports business reporter Darren Rovell to suggest that that the brand has been ‘waiting for the right moment’.

Speaking to ESPN, Gino Fisanotti, Nike’s vice president of brand for North America said, “We believe Colin is one of the most inspirational athletes of this generation, who has leveraged the power of sport to help move the world forward.”

Nike is also the official sponsor for the NFL, so the decision to continue to support Kaepernick and feature him prominently is likely to put pressure on the league. In May this year, NFL team owners approved a national anthem rule that would require players to stay in the locker room if they refused to stand for the national anthem.

On CNN Money, Nike spokesperson Sandra Carreon-John said, “Nike has a long-standing relationship with the NFL and works extensively with the league on all campaigns that use current NFL players. Colin is not currently employed by an NFL team and has no contractual obligations to the NFL.”

Nike Takes a Knee with Colin Kaepernick for 30th Anniversary Just Do It Campaign added by newsroom on September 4, 2018
View all posts by newsroom →