By newsroom on August 27, 2013Comments Off on NikeFuel Map encourages Londoners to get off the Tube and walk 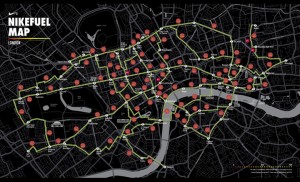 Nike has unveiled a map designed to inspire people to get off the London Tube and walk.

The map is supporting the Nike + FuelBand, a sports watch which tracks the activity of its wearer and rewards them with points. It shows how many NikeFuel points they could earn by walking between subway stations or just around the scenic parts of London.

Researcher, and keen walker, John Bingham-Hall walked the routes – adding diversions to encourage Londoners to see more of their city on foot.

Bingham-Hall’s routes were then transcribed into a map format by the Centre for Advanced Spacial Analysis, part of University College London.

The results were then handed to designer and ‘visualizer’ David Luepschen to turn into a graphically impactful map.

A pocket-sized version of the map is also available to download and pick-up from selected Nike stores in London.

NikeFuel Map encourages Londoners to get off the Tube and walk added by newsroom on August 27, 2013
View all posts by newsroom →