By newsroom on July 9, 2018Comments Off on Not A Single Woman Made The Forbes 100 Richest Athletes List

Amsterdam Worldwide has developed a creative campaign to shine a light on the world of female boxers entitled GIRLS FIGHT. The creative is a series of photography and video portraits about Europe-based female pro fighters conceptualised and created by the Amsterdam Worldwide Group and photographed and filmed by renowned photographer Vitali Gelwich. 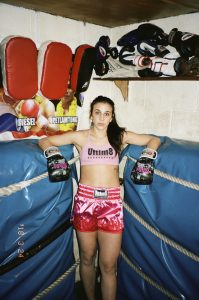 By telling the stories of a diverse selection of young women – girls who fight – we wanted to capture the lives of these authentic athletes.  These female athletes dedicate their lives to their chosen sport, for little or no reward, except for their love of the fight.  The agency met the very best of these women outside the ring, portraying them in their most personal surroundings: their apartments, in front of Ikea shelves stacked with trophies and championship belts. Out came a series of compelling snapshots about female empowerment to ignite a social dialogue about gender inequality.

AWW selected nine fighters and shot films, photos and Instagram trailers showing an intimate view into their private lives. The athletes come from Romania, Spain, UK and Germany. The creative campaign will be launched via two launch events held in Berlin and Amsterdam through gallery exhibitions. The photography is to be displayed on large fine art prints accompanied by 10 videos. 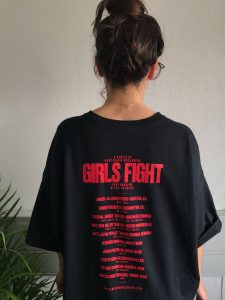 Being a woman in a male-dominated discipline such as boxing can be challenging. While sports male superstars earn millions per fight, their female equivalents often handle two jobs at the same time.  Next to daily trainings and weekly competitions, they coach kids, wait tables in restaurants, or work in supermarkets to finance their professional careers. Most female fighters will never even get that lucky. Instead, they work night shifts at the bar before they put on the gloves in the morning.

Next to daily trainings and weekly competitions, they coach kids, wait tables in restaurants, or work in supermarkets to nance their professional careers. In 2017, boxing legend Floyd Mayweather received around 600 million dollars, winning a fight against UFC superstar Conor McGregor. In comparison, Christy Martin, one of the most successful female boxers of all time, made between 75 to 200 thousand dollars per fight. At the peak of her career.  The outcome: a series of compelling snapshots about female empowerment to ignite a social dialogue about gender inequality both in sport and in life.

The series will also be released on Amsterdam Worldwide Group channels, cross publishing and media partnerships with Highsnobiety, Refinery29 & Vice Promotion through various pop-culture influencers on Instagram with a launch date mid July 2018.

GIRLS FIGHT is a project about gender equality in sports. Or rather inequality. By shining a light on the world of female professional fighting.

CEO Brian Elliott says, “This is the beginning of a long-term project to support women athletes. There are no women athletes listed in the Forbes top 100 best paid list. This is symbolic of a much bigger issue. Companies and brands have to wake up to the fact that they need to commit to women in a substantial and sustainable way. This content is designed to raise awareness for this problem. We want to provoke a more serious reaction on gender inequality in sport. And how action is needed now. “Girls Fight” was always that throw away expression used to hint at really not very serious kind of fight. But today girls fight. They always have. And we set out to tell that story.”

Not A Single Woman Made The Forbes 100 Richest Athletes List added by newsroom on July 9, 2018
View all posts by newsroom →