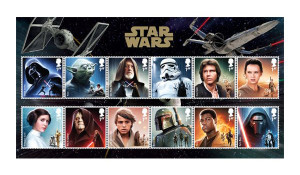 Royal Mail has issued a specially designed set of stamps to celebrate the Star Wars saga.

The stamps will include a special set of 18 being released October 20 ahead of the release of the new entry into the series; Star Wars: The Force Awakens and incudes classic characters such as Luke Skywalker, Han Solo, Princess Leia, R2D2, C3PO, Yoda and Darth Vader alongside some of the characters set to be introduced in the new film.

The design of each stamp replicates the look of the poster artwork by Drew Struzan who painted each of the posters for the series while the font is also the same as that used by the films.

They have been illustrated by British artist Malcolm Tween and marks the first ever use in the UK of flurescent ink on a stamp.