By newsroom on October 28, 2015Comments Off on Saatchi London Brings Home the Bacon for Largest EE Brand Campaign to Date

EE has launched its biggest brand campaign to date to showcase EE’s Connected World. The TV ad sees Hollywood A-lister and face of EE, Kevin Bacon back to thank Britain for getting connected on the UK’s number one network, or as he puts it, becoming ‘totally bacon’!  Kevin even dons a fat-suit to hammer home that the UK is more connected – or more ‘bacon’ – than ever thanks to EE.

The TV ad sees Kevin go on a journey through the streets of Britain interacting with the public as they showcase a number of connected devices including the 4GEE Action Cam, in-car Wi-Fi and a new connected pet device – Pet Pal – which is coming soon.  Kevin ends his journey with a dramatic finale at a packed Wembley Stadium, of which EE is the lead brand and technology partner.

EE’s Connected World campaign illustrates the brand’s investment in connected products beyond mobile such as its innovative in-car Wi-Fi device – which enables up to ten devices to log on at once keeping the whole family entertained on the go – and the world’s first 4G-enabled action camera. EE’s 4GEE Action Cam launched earlier this year and allows epic moments to be streamed live to family and friends. 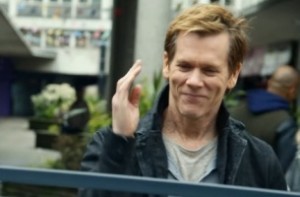 The ad also brings to life EE’s partnership with the UK’s national stadium in above-the-line communications for the first time.  EE signed the ground-breaking deal to become Wembley’s lead partner in 2014 with the ambition to make it the world’s most connected stadium – already 3G and 4G capacity at the stadium has doubled as a result making the fan experience even better.

The 40 second ad will air for the first time today – Wednesday 28th October – and will also appear during primetime TV on Saturday night, including during the X-Factor live shows. The Connected World campaign will also run across print, social and digital.

Spencer McHugh, Director of Brand at EE, said: “Innovation is at the heart of everything we do and we’ve launched some fantastic, truly ground-breaking connected products in recent months.  We wanted to create a memorable campaign that showcased the very best of what we do.  And getting Kevin Bacon to Wembley Stadium for the first time was the icing on the cake.”

Saatchi London Brings Home the Bacon for Largest EE Brand Campaign to Date added by newsroom on October 28, 2015
View all posts by newsroom →