By newsroom on March 13, 2013Comments Off on Sky Sports offers Grand Prix tickets in Twitter quiz 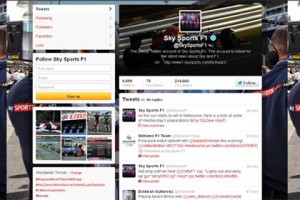 Sky Sports has launched a £5m campaign, including a Twitter competition that offers the chance to win tickets to next year’s Australian Grand Prix, to promote its Formula 1 coverage.

The campaign, by Brothers & Sisters, promotes the company’s Sky Sports F1 HD upgrade service, currently on offer for £5 a month for six months.

Sky Sports is also launching its first real-time, response quiz on Twitter. Fans can enter the “virtual Grand Prix” quiz by retweeting an exclusive hashtag, which will be revealed on the @SkySportsF1 Twitter account during the week before each race.

They must then answer a series of questions against the clock. The highest scorer at the end of the F1 season will win tickets to the 2014 Australian Grand Prix in Melbourne.

The campaign uses new Twitter technology by Visual Voice and goes live this week. The Formula 1 seasons starts this weekend with the Australian Grand Prix in Melbourne.