The Big Issue, ASI and AML Group team to launch a new financial system that works for everyone

By newsroom on November 22, 2018Comments Off on The Big Issue, ASI and AML Group team to launch a new financial system that works for everyone 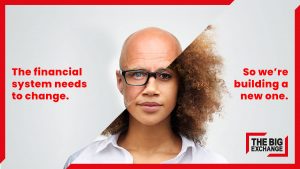 The Big Issue are working with a group of leading fund managers led by Aberdeen Standard Investments (ASI) and independent agency AML Group to launch The Big Exchange, a revolutionary mobile-first impact investment platform that will help everyone do better with their savings, while doing good for society and the planet.

Change in the way the UK saves money is long overdue. Too many people are getting low returns on their cash and missing out on the chance to help others because they don’t have access to impact investment funds.

The Big Exchange aims to change that, and will be launched early next year with a data-driven ‘movement’ integrated campaign through AML Group. The Big Exchange will extend to making wider low cost, ethical financial services available to everyone in society later in 2019.

AML Group CEO Ian Henderson said, “AML does simple ideas for complicated businesses; changing the way millions of people save and invest is definitely complicated. The idea of The Big Exchange is simple, but very hard to make happen and has involved a lot of work over the past year by an incredible team.”

Nigel Kershaw OBE, Chairman of The Big Exchange and The Big Issue Group, commented, “The Big Exchange follows exactly the same principles as The Big Issue and its co-founder Lord John Bird of a hand up, not a hand out. A mission-driven business that is more effective and sustainable because it’s not a charity. It will help millions of people to help each other build a better society. That’s huge.”

ASI Global Head of Distribution Campbell Fleming said, “Change in the way the UK invests is long overdue. Low cost, well-managed impact funds can help people do better with their savings, while doing good for society and the planet without sacrificing financial returns. That’s why we’re launching The Big Exchange.”

The Big Issue had been seeking a way to create a more inclusive financial system for many years and a meeting called by Campbell Fleming in November 2017 led to the platform concept. This brought together The Big Issue, investment managers, tech platform builder FNZ led by Phil Goffin and specialist marketing agency AML Group, led by Ian Henderson who then developed The Big Exchange brand and marketing platform.

The team has developed the platform to user testing stage with a beta version to be launched early in 2019. This will be initially marketed with a PR, social and digital campaign to raise awareness of the issues, then use Experian data to target consumers who would benefit most from the product.

The Big Exchange has received indications of support from major institutions for at least £1 million in funding. As well as the UK’s largest asset manager Aberdeen Standard Investments, Columbia Threadneedle Investments, AllianceBernstein and Alquity will join as founders and offer their impact funds on the platform.

The Big Issue, ASI and AML Group team to launch a new financial system that works for everyone added by newsroom on November 22, 2018
View all posts by newsroom →