By newsroom on November 17, 2017Comments Off on “The Drawing” – A Christmas Tale Brought to You by BETC Paris and Manor

Swiss department store Manor’s commitment is to make every day special.  So, when it came to Christmas, the most special day of the year, they had to think of something out of the ordinary.

Together with its agency BETC Paris, Manor tells a Yuletide story with an unexpected twist.

As we all know, Santa is overwhelmed with letters from kids all over the world, lists from the older and drawings from the younger. But, harsh as it may sound, not every kid is a Picasso and what happens when not even Father Christmas himself can figure out what the drawing shows? 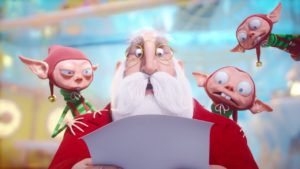 Let the kids down? Never! The modern Santa takes on the challenge and gets his dedicated team on the task. However, when his devoted entourage of internet savvy little helpers can’t decipher the cryptic drawing, he decides to turn to Manor for help…

To create the charming, animated spot, BETC Paris and Manor turned to the collective at AgainstAllOdds. The film has a real Christmas feeling to it and gives a new twist to the classic idea of Santa’s workshop.

With this heart-warming Christmas tale, Manor hopes to bring Christmas magic to all the Swiss homes and wish them all a very “special” and merry Christmas!

“The Drawing” – A Christmas Tale Brought to You by BETC Paris and Manor added by newsroom on November 17, 2017
View all posts by newsroom →