By newsroom on August 8, 2018Comments Off on The Womb presents the good side of oil in its new work for Sunny

The Womb’s launch campaign for International Sunny Oil has hit television screens with focus on the critical role which oil plays in building children’s immunity.

Over the years edible oil category has coached consumers in believing that edible oil is bad for your health. And by linking modern lifestyle related problems like increasing cholesterol & blood pressure, category has further re-established this belief. With Oil scientifically designed to avoid getting into food i.e., ‘Low-Absorb’ has resulted in edible oil being reduced to a medium of cooking rather than being a core cooking ingredient for a majority of Indian cuisines.

But scientific research says otherwise, role of oil is much more than just a medium of cooking. Oil not only helps unlock vital nutrition from food while cooking, it also helps fat soluble micronutrients & vitamins like A, D & E getting absorbed by the body.

International Sunny Oil’s latest campaign is designed to highlight the growing modern mothers’ need to build immunity in light of frequent weather changes & pollution, a reality which children face every day. And while these external elements are beyond her control, the power to mould her children and make them stronger from within lies in her hands. The 40 second spot highlights the problem of changing weather conditions by drawing a vital difference between a clay statue & a real life child and how proper diet with micronutrients can help children fight from these external elements.

Along with TV other media which will carry this message include digital, radio, outdoor and retail. 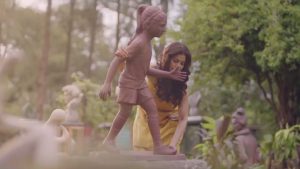 Commenting on the campaign, Prashant Sarwade – Head of Marketing, Frigorifico Allana Pvt Ltd., said, “We at Sunny, believe that right nourishment for children from an early age is critical for their healthy future. Sunny Oil enables the modern day mothers to provide their children a balanced proportion of nutritive elements, thereby preparing them to face the environmental hardships. The benefit of ‘Fight-O-Mins’ that the oil offers helps in lending credibility to the Sunny promise.”

Navin Talreja – Founding Partner, The Womb, had this to say on the campaign, “The opportunity in the category is immense, as for decades there hasn’t been edible oil related ‘new news’. ‘Har Niwala Andar Se Tough banane Wala’ targets the progressive homemaker looking to give the best protection to her child and this delivered through oil, something which a child consumes 3 times a day is refreshingly new news for mothers.”

Suyash Khabya – Creative Partner, The Womb, stated, “There are over 2000 cooking oil brands in the country. How can we be different in our storytelling? We would be lost in the clutter if we did another ad with ‘dining table conversations’ or ‘good looking cooking shots’. So we took the insight and brought it to life in an emotionally stunning manner with stop motion, yet keeping it impactful”

E Suresh – Director, Eeksaurus, added, “The creative on the film focusses on something out of the mundane, where the visual metaphor of the story is a clay sculpture that withstands the ever-changing harsh weather conditions drawn as a parallel with a growing child instantly made sense to me. To portray a mature visual language that compliments the depth of the central concept was a challenge. But our technical team did our best to pull it off.”

International Sunny Oil is the flagship brand of Frigorifico Allana Private Limited, the Consumer Products division of the Allana Group that was established in 2013 in India. Within a short span of few years, it has successfully launched many world class food products that cater to both consumers and industrial businesses in categories like edible oils, bakery ingredients and bakery fats. It also markets London Dairy, a premium ice cream brand amongst others.

The Womb presents the good side of oil in its new work for Sunny added by newsroom on August 8, 2018
View all posts by newsroom →