By newsroom on August 7, 2018Comments Off on Tourism Ireland promotes world class golf across Ireland with Sky Media 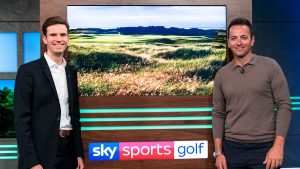 Tourism Ireland has selected Sky Media to promote its latest campaign highlighting world class golf across Ireland. It inspires British golfers to visit Ireland and celebrates the Open returning to Northern Ireland for the first time in 68 years.

World-class golfing talent and Sky Sports Golf pundits Paul McGinley and Nick Dougherty feature in branded content that promote golf around the island. Segments were filmed from the Irish Open golf course in Ballyliffin and at the Sky Sports Golf studio.

Ryder Cup hero Paul takes an in-depth look at his favourite golf clubs in the North West of Ireland including Rosapenna, Portsalon and Ballyliffin. He walks fans through the courses and local areas highlighting what makes them special in two separate creatives. Nick takes fans through his notebook of local golf courses, famous sites and landmarks as well as hidden gems for food and beverage.

Professional golfers including Lee Westwood, Graeme McDowell, Paul Dunne and Jon Rahm star in other creatives and share why they love to play in Ireland. A final creative features Irish Open fans being interviewed on why they love golf, with aerial footage of the stunning views from golf courses across Northern Ireland and the Republic of Ireland.

The content is available to view online on Sky Sports’ website, together with native articles about great golf in Ireland. Social posts will amplify the campaign.

Sky Media is a natural fit for Tourism Ireland as Sky Sports is the home of golf, broadcasting weekly from the European Tour and the PGA Tour and is the only media owner to cover all four Majors. The campaign is amplified through Sky AdVance, allowing Tourism Ireland to target golf and travel fans with a 30-second ‘promo’ montage.

Sky Media is working with The Story Lab and Carat on the campaign, which will run from 6th August to 3rd September.

Darren Quinton, Consumer Marketing Manager at Tourism Ireland, said, “We are excited to be working with Sky Sports Golf to create an engaging suite of films that showcase the great golf on offer across the island of Ireland to their loyal viewers.”

Rachel Bristow, Director of Partnerships at Sky Media, said, “This compelling campaign takes full advantage of our unrivalled golfing talent, content and audience insights and will encourage more golfers to visit the exceptional Irish courses. It’s a great message to mark the Championship returning to Northern Ireland for the first time in 68 years.”