By newsroom on December 21, 2015Comments Off on Uber hits back at TfL’s five minute wait proposals with hidden camera video

Uber has rolled out a campaign to hit back at Transport for London’s consultation on private hire regulations in the capital, namely one proposal which could see the taxi app make passengers wait five minutes before a pick-up.

Uber worked with Creature of London on the video which shows how Londoners reacted when they were forced to needlessly wait five minutes between booking an Uber and being able to start their journey. 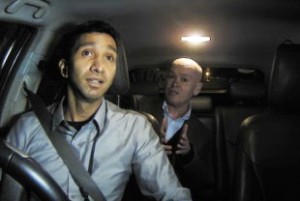 Tom Elvidge, general manager of Uber London, said: “As this video shows, forcing people to pointlessly wait five minutes before they can start their journey makes no sense at all. This is just one of a number of proposals from Transport for London which would mean an end to the Uber people know and love today. Londoners have until next Wednesday to make their voices heard. More than 192,000 people have already signed our petition against these proposals and we hope many more will over the coming days. Let’s keep London moving, not slow it down.”

Other proposals include banning showing live cars in apps, forcing Uber to allow booking up to seven days in advance and stopping drivers from working with more than one operator.

Uber claims that under the proposals it could stand to lose as much as £19m a year and is urging its users to take have their say before the consultation closes on December 23rd.

Uber hits back at TfL’s five minute wait proposals with hidden camera video added by newsroom on December 21, 2015
View all posts by newsroom →