By newsroom on March 24, 2016Comments Off on Unicef uses Twitter to mark World Water Day with interactive #H20Filter push 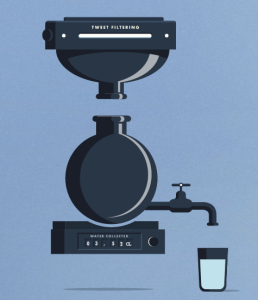 As part of its wider ‘Water Challenges’ initiative, the charity wants to raise awareness around the fact that many individuals around the world are unable to access clean water. As such, it’s created a Twitter tool which allows individuals to, quite literally, turn the H, 2 and O’s in their tweets into real life donations.

The digital-only drive, created by Publicis Conseil invites fans to ‘extract’ the three characters from their backlog of tweets in order to create ‘virtual water molecules’ which can then be transformed into a donation to help fund programmes that will improve clean water facilities for communities worldwide.

To round off the strategy, the campaign will take to the streets: with JC Decaux advertising the promotion on its 52 digital screens along the La Défense esplanade.