By newsroom on August 7, 2017Comments Off on Usain Bolt Celebrated as #ARunningLegend by Virgin Media 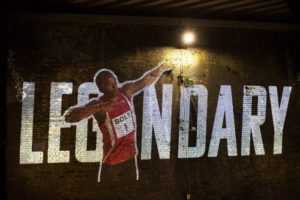 To pay homage to the fastest man on the planet, Virgin Media, via CURB, beamed Bolt onto the streets of London for a virtual victory lap to celebrate his incredible record-breaking career. The activity was all captured in a cutting-edge video and in the film, titled #ARunningLegend, Bolt is seen running through well-known locations and across famous landmarks, while taking in some of his favourite haunts in the capital.

Bolt, who has been a Virgin Media ambassador since 2012, crossed the finish line for the last time in a 100m final just after 21:45 Saturday 5 August, picking up a World Championship bronze. 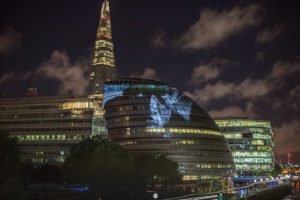 Adam Azor, Managing Director at CURB, comments: “When it comes to honouring Usain Bolt, you can’t do anything less than extraordinary. CURB wanted to celebrate his relationship with London by telling a story that was delivered using the latest projection technology and which allowed the great man to run London one last time.”Bolt’s Victory Lap begins in Brixton – home to one of largest Jamaican communities in England – and sees him projected onto the Electric Brixton, where he is poised, ready to begin his race. 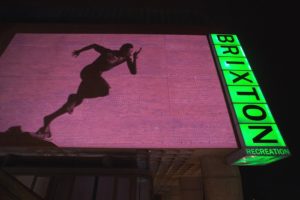 As Bolt sets off on his lightning-fast journey, he races from Brixton Recreation Centre, under Brixton Rail Bridge through to Cold Harbour Lane. He then sprints through the Southbank with the world famous Tower Bridge as a backdrop and then across the front of the iconic Tate Modern. The film shows him crossing the river past Embankment Underground Station, where he makes his way to East London, towards Brick Lane, which marks the location where he DJ’d after his gold medal winning success at London 2012. 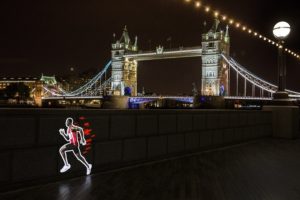 Bolt then heads back to the West End, where he is projected dancing above clubs in Soho, where he famously celebrated his 30th birthday last August.

The video culminates with Bolt finishing his victory lap at City Hall with an epic shot of the London skyline, where the hashtag #ARunningLegend is projected onto the building to close the film.

Kerris Bright, Chief Marketing Officer at Virgin Media, comments: “The fastest man on the planet goes hand in hand with the fastest broadband and Usain is super-fast and super entertaining; the perfect embodiment of Virgin Media.Beaming Bolt’s epic ultrafast victory lap is a unique and fitting way to mark his last ever 100m final and celebrates our long and continued association. Usain Bolt is a true running legend.”

Usain Bolt Celebrated as #ARunningLegend by Virgin Media added by newsroom on August 7, 2017
View all posts by newsroom →