By newsroom on November 22, 2017Comments Off on Whale and Dolphin Conservation launches 30th anniversary brand identity 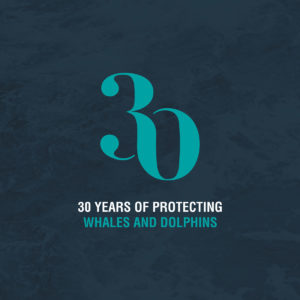 This identity (which will run for 12 months) aligns with the brand’s existing messaging, and will be used as a platform to help re-engage audiences and raise the charity’s profile. The design was created to work with the existing WDC brand and promote the charity’s key messaging – ‘30 years of protecting whales and dolphins’.

WDC is the leading charity dedicated to the protection of whales and dolphins. Its vision is a world where every whale and dolphin is safe and free, and its mission is to inspire global action to protect them.

In 2018 the charity will launch a species index and a manifesto, also designed by Conran. The manifesto will outline WDC’s intent and the species index will reveal the countries that are the worst offenders when it comes to whale and dolphin welfare.

Speaking about the new WDC work, Conran Design Group CEO Thom Newton, said “We have tried to capture WDC’s 30-year passion and commitment to the protection of whales and dolphins with this new work, while taking inspiration from the original design. We continue to collaborate with and support WDC in its critical work for these incredible animals.”

WDC head of press and communications, Danny Groves said: “The 30th year celebrations give us an opportunity over the coming 12 months to use the milestone as a tool to generate awareness, reinforce our position as the whale and dolphin charity, and hopefully raise some vital funds at the same time. A key element to all of this is the addition to our core brand identity which has been brilliantly crafted by the team at Conran. One of the themes we will use in the next year will be ‘Stop Making History’, and will centre on how critically endangered a number of species have become over recent decades. We have to keep up our fight and good work to give them a chance of survival in the coming 30 years, and the support Conran has given us is crucial.”