By newsroom on November 15, 2018Comments Off on 2,000 “lost teddy bears” to appear on UK high streets to launch World Vision UK’s latest campaign 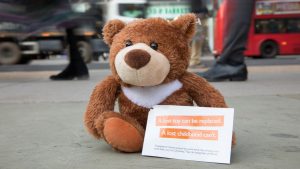 Each bear (named Hope) is fitted with a tag on its wrist with directions on how people can help build awareness of the world’s most vulnerable children by sharing the bear on social media. 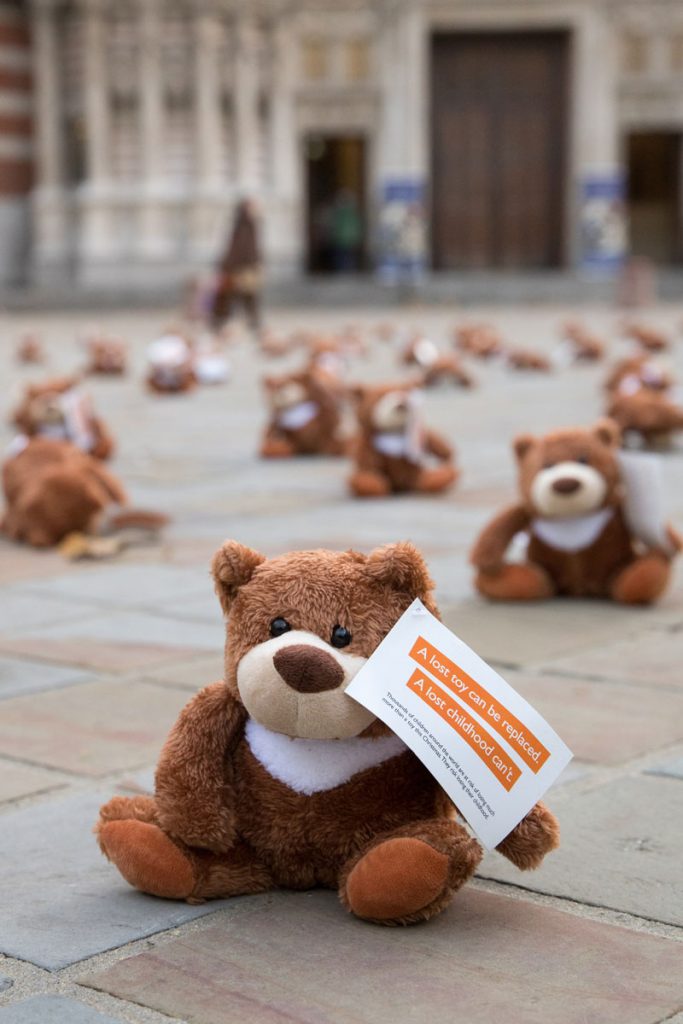 To support the launch, World Vision questioned more than 1,000 UK parents to find out the extreme lengths they’d go to make sure their children are not parted from their favourite toys.

According to the research, almost half (45%) of UK parents have purchased duplicates of their child’s favourite toy in case it gets lost or damaged. The survey also found that one in four parents in Britain would be prepared to travel up to 200 MILES if their son or daughter misplaced their favourite toy.

Two thirds (70%) of parents in Britain claim that they would offer a reward for the safe return of a cherished toy, with nearly half of that number saying they would be willing to pay double the purchase price for its safe return. This is perhaps unsurprising given that 38% of those questioned said their child can NEVER go to bed without their favourite toy.

37% of mums and dads confessed to trying to appease their child by telling them a missing possession was now being looked after by the ‘Toy Fairy’.

Sally Bownes, Head of Brand Marketing at World Vision said: “This research reveals just how dearly children in the UK value their favourite toy. A lost toy can be replaced, but unfortunately a lost childhood can’t. Childhood is sacred, wherever a child lives. Hundreds of thousands of children around the world are at risk of losing much more than a toy this Christmas. Many are in danger of becoming enslaved – coerced, forced or tricked into becoming a child labourer, a child soldier or a child bride. We want people to join us this Christmas in helping make a real and lasting change for a child and their community.” 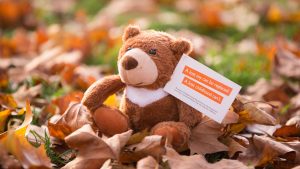 Gavin Hilton, Strategy Partner at VCCPMe added: “At this time of year, it’s incredibly difficult for any charitable organisation to cut through the clutter as the entire market ramps up its fundraising efforts and potential donors are distracted by commercial brands vying for their attention.  Hope is not just an insight driven solution to this, she’s the first chapter in us telling the real story of World Vision’s cause.”

World Vision UK is encouraging the British public to raise awareness of children at risk of losing their childhoods by finding Hope the teddy bear and sharing a photo on social media using the hashtag #ShareHope. The bears will be distributed at shopping centres, parks and various other public places across the UK this Thursday 15th November.