By newsroom on April 6, 2016Comments Off on Blaise Matuidi Shines Like a Star in W+K Amsterdam’s Nike Football Spot

Spark Brilliance, which launches in France from April 6 and will shortly roll out digitally across the globe, charts the progression of French footballer Blaise Matuidi’s career – a player who is emblematic of the Spark Brilliance idea.

The campaign’s 90-second film begins with a young Matuidi recalling a decisive moment of footballing brilliance from legendary former PSG and Nigerian player Jay-Jay Okocha — then in his prime. This formative moment spurred Matuidi to even greater achievements that pay the story forward. His singular skills, team play and enigmatic goal celebrations today inspire his teammates, fans and future generations of players. 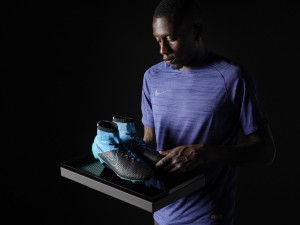 Created by Wieden+Kennedy Amsterdam, the campaign is part of Nike’s 2016 global football platform. 60, 20 and 15-second versions accompany the long-form film, along with influencer partnerships and online media further underpinning the campaign.

David Smith and Craig Williams, W+K Amsterdam Creative Directors, said: “Blaise Matuidi is an infectious footballer, his style and swag, on and off the pitch, has made him a beacon of French popular culture. Just google “charo life” to feel the Blaise effect.”

The campaign also features the new national French football kit, which was first revealed on March 18, a further nod to the blend of performance and style Blaise represents.

Spark Brilliance will air on TV in France and roll out on digital channels globally in the coming week.

Blaise Matuidi Shines Like a Star in W+K Amsterdam’s Nike Football Spot added by newsroom on April 6, 2016
View all posts by newsroom →