By newsroom on November 15, 2017Comments Off on Conran Design Group & Adoreboard proclaim Debenhams as the winner in the battle of the Christmas ads

Amid much anticipation and expectation, the Christmas TV commercials have aired. Industry comment and opinion about which one is best is rife, but how do those whose opinion really matters feel?

Conran Design Group has partnered with Adoreboard to find out how TV viewers feel about 2017’s selection of Christmas ads, from retailers and supermarkets alike.

Conran analysed 15,000 tweets from 2–14 November, reviewing what people are saying about the year’s Christmas ads: which one struck a cord and which one is a turkey!

Debenhams’ ad, ‘You shall’, is the clear winner this year when it comes to emotional engagement, with a score of 66 on a scale of -100 to 100. Of the 15,000 tweets analysed, people took to social media to discuss the ‘joy’ and ‘trust’ they felt about 2017’s ad from the retailer. Viewers like the fairy tale theme and they feel that the magic of Christmas has been captured.

Marks & Spencer ranks second with ‘Paddington Bear and the Christmas visitor’. The ad has connected with viewers on an emotional level, who expressed joy in their posts at seeing much loved character Paddington Bear.

Asda’s ad, ‘Imaginarium’ ranks in third place. While Tesco and Amazon performed the worst in the review ranking 15 and16 respectively.

With a score of just 31, Tesco’s ad revealed high levels of ‘sadness’ and ‘anger’. The grocer’s attempt at inclusivity has received a backlash on Twitter with people voicing strong opinions about the brand’s motives.

Amazon’s ad scored the lowest at -5 and reveals high levels of ‘anger’ from parents complaining that the ad implies Santa isn’t real and therefore spoils Christmas for their children.

Potentially the most surprising reveal is that the perennial favourite, John Lewis, shares sixth place with other retailers. While 20% of all tweets are about the brand, when it comes to emotionally engaging viewers this year, the brand hasn’t achieved former success. 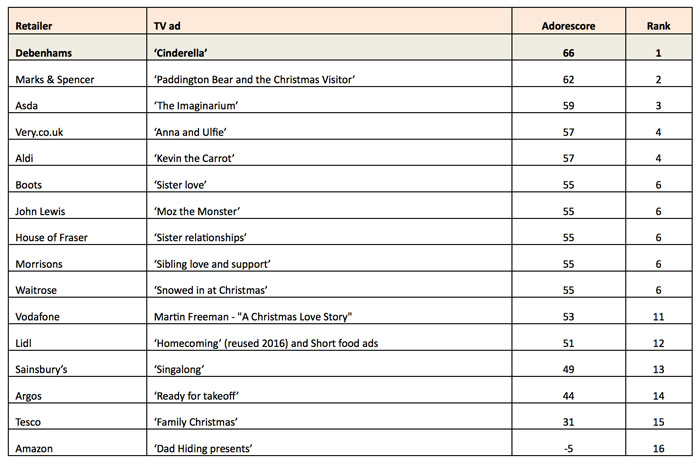 Conran Design Group & Adoreboard proclaim Debenhams as the winner in the battle of the Christmas ads added by newsroom on November 15, 2017
View all posts by newsroom →