By newsroom on March 8, 2016Comments Off on Mind and MEC launch #TakeOffTheTape social campaign with celebrity backing

Mind, the mental health charity, and Media agency MEC have launched an exciting new campaign alongside a raft of celebrities and ambassadors encouraging people to open up about what is making them anxious.

The social media driven campaign known as #TakeOffTheTape has already seen TV presenters, actors, models, sports men and women from across the country confirm that they will support the campaign, with CBBC presenter Ben Shires the first to take part this morning. 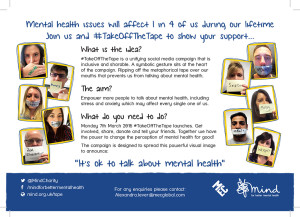 Shires said; “It’s just so important for us to talk about the things that worry us. The team at Mind do such an amazing job supporting people across the country, and the least that I could do is open up just a little to share something that makes me anxious, and I know my friends and family will also be following suit by taking up the challenge.”

Despite many strong campaigns around mental health, the subject remains highly misunderstood. People are still reluctant to be open when they’re struggling to cope because of the reaction they fear from their friends and peers.

Ruth Richards at Mind adds; “At some point, there are problems that everyone is likely to face. Whether it’s worry about work, money, our image, health, a loved one, exams – stress and anxiety are emotions we all encounter. If we don’t speak out and seek support, these feelings can build and start to impact on our quality of life, our relationships and our health. By encouraging everyone to talk more honestly about things being tough, we can help people feel more comfortable about admitting that they need some support.” 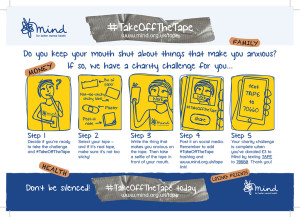 One in four of us will experience a mental health problem in any given year, but Mind’s research shows that four out of five 18-34 year olds admitting to putting on a brave face when they are anxious

A quarter of 18-34 year olds also admitted to feeling that to show their emotions is a sign of weakness, even though one in five said they had cried in the past week because of anxiety.

“With a better understanding of mental health, we hope more people will seek support early, before things become too much,” added Ruth from Mind.

CBBC presenter, Ben Shires concluded; “Even the most positive and fulfilled people you know will get anxious. For my Take Off The Tape challenge I chose the weight of expectation as the cause of anxiety. To be honest, I consider myself one of the luckiest blokes out there as I love my job, however understanding where the chinks in the armor are really help to lend perspective to everything.” 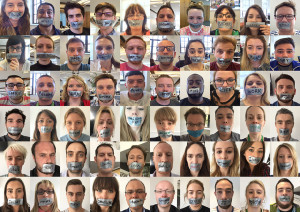 The new social campaign developed for Mind includes a symbolic gesture of ripping off the metaphorical tape over our mouths that prevents us from talking about what is making us stressed or anxious.

To get involved, simply get a piece of paper, post-it-note or tape and write the one thing that makes you most anxious. Take your selfie with your message over your mouth including the message: Don’t be silenced!

#TakeOffTheTape Text TAPE to 70660 and donate to @MindCharity. Then share it with your friends on social media and encourage your friends to do the same.

Mind and MEC launch #TakeOffTheTape social campaign with celebrity backing added by newsroom on March 8, 2016
View all posts by newsroom →