By newsroom on October 16, 2018Comments Off on New SunLife funeral campaign lifts the lid on the final taboo: ‘the F word’ 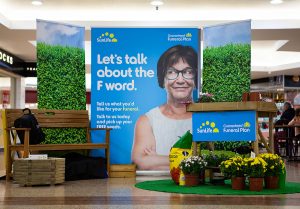 Running with the strapline ‘Let’s talk about the F word’ the creative is all about breaking the social taboo around funeral planning by using another social taboo. The campaign has launched in Hull, Torquay and Eastbourne, and will run until 31st October.

Each year, SunLife produces the UK’s longest-running study into the costs of funerals. The 2018 findings showed that despite the average funeral costing over £4,000, only 6 percent of people in the UK have a pre-paid funeral plan in place, compared to 70 percent in the Netherlands.

Colin Clark, head of strategy and planning at Five by Five, said: “SunLife is the market leader in over-50 plans, and with that in mind, we wanted to cast that net even wider and cement the brand as the go-to funeral plan provider. Death isn’t exactly a hot topic of conversation. This is uncharted territory and to be successful, we had to go out with something that disrupts the market and draws in a wider audience. SunLife trusted us to take the brand to new places, and hopefully ‘the F Word’ serves as the next step to breaking the taboo.”

Ian Atkinson, Director of Marketing at SunLife, added: “Our ‘F word’ campaign aims to bring the topic of funerals to the forefront. As a nation, we need to start talking about what we want when we die, to spare our families more stress and upset at such an emotional time.”

New SunLife funeral campaign lifts the lid on the final taboo: ‘the F word’ added by newsroom on October 16, 2018
View all posts by newsroom →