O2 launches new ‘Breathe It All In” campaign by VCCP

By newsroom on September 3, 2018Comments Off on O2 launches new ‘Breathe It All In” campaign by VCCP

On August 30, O2 launched a bold, new strategic and creative direction for its iconic brand, returning to its roots as a breath of fresh air for both customers and the sector as a whole.

Recognising the power that mobile technology has as a window out to a universe that is full of potential, the strategy draws on O2’s founding insight of the importance of digital oxygen to help everyone feel more alive – from staying social, starting passions and making memories. 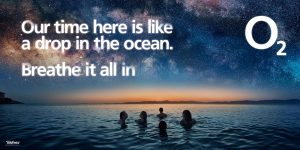 Building on O2’s longstanding heritage of launching standout campaigns, a supporting multi-million advertising campaign aims to inspire the public to think about their individual roles within the universe, rallying them to ‘breathe it all in’ and demonstrating the role that O2 can play to kick start new experiences.

The campaign by VCCP, first launched in some of the biggest out-of-home spots in the UK including Piccadilly Circus Lights, Waterloo Motion and an experiential walk through the Waterloo Travelator, as well as a wrap of the IMAX immersive cinema environment.

On 1st September a 90 sec hero TV advert will break on ITV during the X Factor. Featuring and narrated by British spoken word artist George the Poet, the ad twists and turns through the beginnings of the cosmos moving through planets, stars and moons. 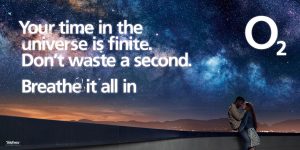 As George breathes in his surroundings, the audience suddenly crests over a colourful blue planet – Earth – before plunging underwater and breaking through the surface of the ocean to reveal the night sky. The ad is set to the single Loud Places ft Romy by Jamie xx, also part of band The xx, that in 2017 set the record for the longest run of sold out shows at O2 Academy Brixton.

A major fully integrated campaign follows, featuring bespoke social first vertical content on channels including Facebook, Twitter, Instagram and Snapchat, as well as partnerships with premium content creators interpreting what ‘breathe it all in’ means to them. Cinema, broadcast and programmatic video on demand will also amplify the creative across visual platforms, while digital out-of-home will be rolled out across animated large formats nationwide. 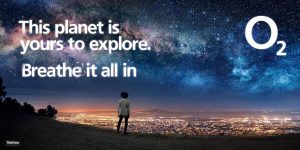 O2 will also be the first UK brand to use sky recognition technology in a Snapchat world lens. The lens allows Snapchatters to point their phone at the sky to see it transform into the cosmos with George the Poet’s lyrics appearing as words of inspiration. In retail, O2 stores will be transformed to feature new highly impactful window creative, aligned with digital and social.

Nina Bibby, CMO at O2 comments, “O2 began as a breath of fresh air because we understood that phones were essential to living. But now these devices support our lives more than ever before, so it’s time for O2 to be a breath of fresh air again and inspire our customers to feel more alive with technology. This is not just another campaign, but rather a whole new direction for the brand based on its roots and what makes O2 unique in the marketplace.” 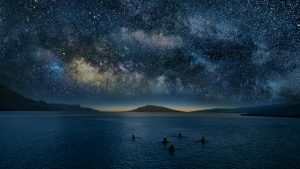 The new brand direction coincides with the unveiling of a revolutionary new way for customers to pay for their devices, as O2 continues to shake up the mobile industry. O2 custom plans give pay monthly customers complete control and flexibility over how and when they pay for their device. Gone are the days of only being able to select fixed contracts. Customers will now be able to build a plan to suit them. With O2 custom plans they can choose:

Custom plans are available on all pay monthly devices.

O2 launches new ‘Breathe It All In” campaign by VCCP added by newsroom on September 3, 2018
View all posts by newsroom →