By newsroom on February 7, 2018Comments Off on Ocean Outdoor Transforms London IMAX into a Big Mac for the Burger’s 50th Anniversary 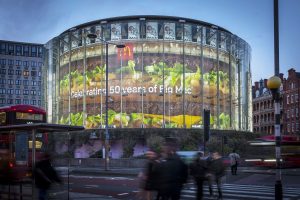 The perfectly rotund London IMAX landmark has been transformed into a colossal Big Mac to celebrate the 50th anniversary of McDonald’s iconic burger.

A Big Mac of the same proportions as the iconic IMAX would measure a gigantic 1,734 square metres.  The spectacular IMAX display is powered by 48,000 LEDs of every possible colour to depict the bun, the burger and all the required garnishes.

Created by Ocean Outdoor and the ad agencies Talon, OMD and Leo Burnett London as part of the Big Mac’s birthday celebrations, McDonald’s delicious visual feast will light up London until February 25.

Ocean Outdoor Transforms London IMAX into a Big Mac for the Burger’s 50th Anniversary added by newsroom on February 7, 2018
View all posts by newsroom →