By newsroom on March 8, 2018Comments Off on OVO Energy takes swing at Donald Trump in second phase of Uncommon’s campaign

The film footage and images, shot by British art provocateur Alison Jackson in partnership with Uncommon London, was released to support OVO Energy’s biggest and most provocative advertising campaign to date, entitled ‘Power Your Life Differently’ – a rallying cry for people to safeguard our environmental future by choosing renewable energy.

The film makes the point that not even certain world leaders, who have the power to make the wrong decisions on behalf of the entire planet, can stop the movement towards renewable energy. 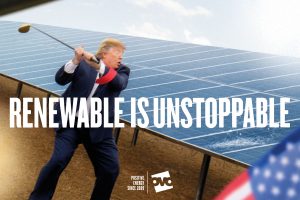 The content will run on social media, paid digital and authorised fly-posters across London.

Sarah Keegan, Brand Director, OVO Energy, said: “We’re taking a stand against politicians and high-profile individuals who stand in the way of sustainable progress by unequivocally supporting fossil fuels and denying climate change. We’re making the point that if you’re against what they for stand for when it comes to powering our planet, we’re with you. ‘Power Your Life Differently’ aims to empower people to join OVO Energy in its quest to create a sustainable energy system, by signing up or switching to renewable electricity.”

Nils Leonard, Founder & Chief Creative Office Uncommon London said: “Legislation and politics have the power to create change but often don’t. The right image can make someone pick up the phone. If all of the stories around climate change aren’t motivating enough to provoke a change, then the decisions being made by some world leaders on our behalf should be.”

OVO Energy takes swing at Donald Trump in second phase of Uncommon’s campaign added by newsroom on March 8, 2018
View all posts by newsroom →