By newsroom on September 24, 2018Comments Off on Powerful short film by Area 23 and Great Guns says ‘Never Again’ to school shootings

Area 23 and Great Guns launch a powerful documentary, ‘Never Again, 6:20’, which highlights the Parkland shooting and the activism it has inspired. The film is 6-minutes and 20-seconds long – the same amount of time in which a lone gunman took the lives of 13 students and four staff members at Marjory Stoneman High School in February in 2018.

Directed by Great Guns’ Chris Neal, ‘Never Again, 6:20’ features insightful and poignant interviews with students and the local community who reveal how the shooting has shaped their lives and their determination to put an end to such tragedies in future. The film captures how frustrations at the lack of legislative progress on gun control have led to activism and birthed initiatives such as student-organised March for Our Lives and parent-led Posts Into Letters.

“The idea came from Emma Gonzales’ powerful speech during the Washington D.C. March for Our Lives,” explains Director Chris Neal. “I remember watching her speech from my cell phone the night after we attended the powerful March in Parkland. I watched Emma’s entire speech as tears streamed down her face and I felt chills through it all. 6-minutes and 20-seconds doesn’t sound like a long time but when you sit through it with that specific context, you can’t help but feel the weight of it. That’s what Emma’s speech captured, and I wanted the film to elevate her point.”

He continues: “The goal with this film was to explore the powerful emotions we heard during our time in Parkland, Florida. We thought it would be an excellent addition to an already powerful campaign. We spent four days interviewing parents, students, and friends in the community and saw the tears and drive for change. The underlying idea of Posts Into Letters is to elevate voices that get drowned out. This film is another avenue for that idea, so elevating the voices and emotions of the Douglas community was extremely important.” 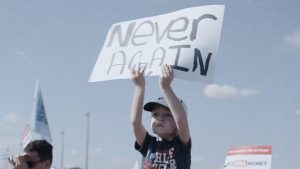 Executive Producer, Thom Fennessey comments: “When the opportunity came up to go to Parkland and document the March for Our Lives event, the Great Guns team were immediately onboard. Gun control is a very important and necessary cause to fight for. Upon stopping at a café for direction in Parkland, Florida, we luckily happened upon local gun control activists. The waitress’ mother, brother and son were all organisers of the march. I also happened to meet a gentleman who helped enact the new gun control policy change at the Florida legislature. It seemed that with our hearts in the right place, we were led to the right people at the right time. It was beyond coincidence.”

“Being part of the team on this project was a humbling and emotional experience,” comments Laura Gregory, CEO and Executive Producer of Great Guns. “Why did it take such a devastating event to bring people together who have the courage to lobby for change? Why was it the young who led us to march? All that matters is that the sound of these voices bring change and we continue to support them.”

Managing Director at Area 23, Tim Hawkey, comments: “Embarking on the Posts Into Letters and subsequent 6:20 project was a no brainer for us at Area 23. Like so many Americans, the Parkland shooting shook us, leaving us desperate to help in some way. We were so inspired by the strength and leadership of the students of MSD High School, and the courage of the parents who turned their grief into action. We are proud to be a part of the movement that has sprung from this tragedy.”

Senior Broadcast Producer at Area 23, Elan Schoonmaker, comments: “We didn’t know what to expect before our trip to Parkland, just weeks after the incident. We found ourselves surrounded by kids who had just experienced unspeakable trauma, let alone in their own hometown. But they didn’t want our condolences, nor our reassurance that everything would be okay. They didn’t want to forget what it felt like to have their world turned upside down. All they wanted from us was to be listened to, and to recruit our help in ensuring such a tragedy doesn’t repeat itself. They had the voice and we had the technology to amplify their voices across the world. Our goal was to ensure no one could ignore them, and our work isn’t finished until all eyes are on Parkland.”