By newsroom on January 27, 2016Comments Off on PSONA Films races to deliver an inspirational Para sport epic for BP 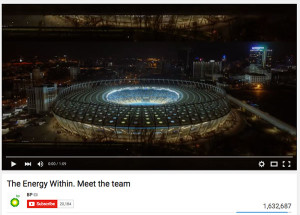 The London 2012 Paralympic Games set a new benchmark for the profile of Para sport. For two weeks disabled people were defined by what they could do, rather than what they couldn’t. As a headline sponsor of the Games, BP played its part in helping to achieve this.

BP created a new positioning for its support of Para sport, called The Energy Within. The essence being that human spirit is the most powerful energy of all. This was selected as it reflects a truth in both Para sport and BP’s business in meeting the world’s growing demands for more and lower carbon energy.

BP selected PSONA Films, which it worked with at London 2012, to produce two films to release The Energy Within and promote BP’s IPC partnership.

It kicked the campaign off with an inspirational film featuring Dutch sprinter Marlou van Rhijn, triple world record holder as well as Paralympic, World and European champion. The film highlighted the energy that is the human spirit, encapsulated in a single bead of perspiration falling in slow motion from Marlou’s face. As the bead exploded on the track, Marlou exploded from her blocks.

The film was shown to great acclaim on the big screens at the Doha World Athletics Championships in October 2015. The event was a key staging post on the Road to Rio and the last major event at which so many top Paralympians would compete on a single stage. As such it had a huge potential to highlight BP’s proud support of IPC and individual athletes. Overall the film had 65 million views in 2015.

To communicate the team aspect of BP’s partnership and to reveal another aspect to The Energy Within, BP commissioned and released a second film. The Meet the Team film aimed to communicate the breadth of BP’s support for Para sport by featuring a selection of the 24 athletes we support around the world. The one minute film communicated the idea that when the world’s best athletes come together on the world’s biggest stage in Rio, many will discover an energy within they didn’t know they possessed. With limited digital paid support, the film had to be as inspirational, and shareable as possible. 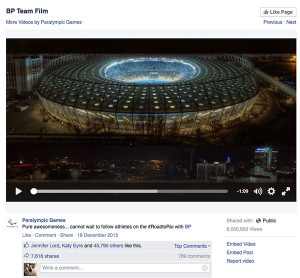 PSONA Films’ challenge was that there was a very tight deadline to deliver the film before Christmas. Because of this and the fact that athletes were located all around the world, it meant it would not be possible to take new and original footage.

Faced with this challenge, PSONA Films undertook a massive research exercise to find existing footage of the athletes that it wanted to feature. This involved trawling the internet for existing film, assessing it and clearing footage. It was a race against time.

Compounding the difficulty was the fact that the film came in a variety of different formats and qualities, so PSONA Films had to devise a way of creating a sense of continuity. It came up with a graphics-based framing solution that gave each athlete a high quality introduction regardless of the quality of the original footage.

Meet the Team employed similar editing techniques and followed a similar structure to the first film featuring Marlou. The same voice artist provided further continuity. It builds slowly from the opening, before a trigger, in the shape of an arrow being fired, changes the pace of the music and editing. This builds into a crescendo where athletes cross finishing lines in victory, having located their energy within.

In less than one month the film has had over 10 million views globally and nearly 46 thousand ‘likes’ on the Paralympic Games Facebook page resulting in it being its most popular post of 2015. It also received 1.6 million views on BP’s YouTube Channel.

Katy Eyre, managing director/executive producer, PSONA Films said: “As a proud supporter of Paralympic sport and a partner of the IPC, BP wants to highlight the role that it plays supporting individual athletes as they build towards their moment in the spotlight. The Meet the Team film was an amazing project to be involved with as we had to find fresh ways to create truly inspirational content to a very tight deadline.”

The film lays the foundation for BP’s ongoing support for the IPC and Paralympians ahead of Rio with more exciting initiatives still to come. 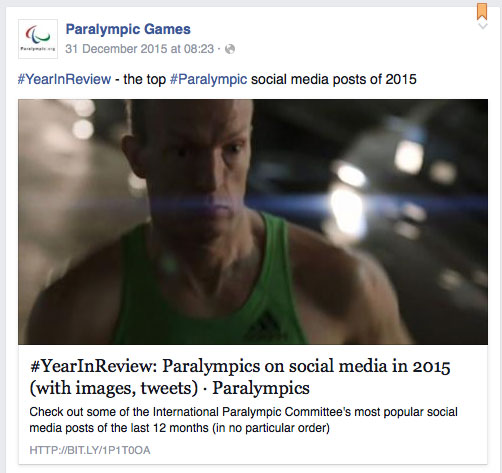 PSONA Films races to deliver an inspirational Para sport epic for BP added by newsroom on January 27, 2016
View all posts by newsroom →