By newsroom on January 13, 2016Comments Off on Radical New Axe Campaign Reveals What Makes Guys So Damn Hot

Axe, famous for revolutionizing the male fragrance category and for its iconic advertising, is redefining the category again. In a marked evolution of its positioning, the Unilever owned brand is launching an expansive new range of male grooming products, including daily fragrances, shower gels, hair styling products and more.

The new range will be backed by an unprecedented new campaign featuring a radical, progressive point of view on masculinity and attractiveness.

“Axe is a brand that’s always been about attraction,” says Rik Strubel, Axe Global Vice President. “And we know from years of research that what makes a guy attractive is … him. His strengths, his weaknesses, his individuality and most of all how he expresses it.”

“But despite that, a lot of guys don’t feel comfortable being themselves. Because they’re afraid of what people will say. Of being labelled. Of embarrassment. Afraid that what’s unique about them isn’t considered attractive or acceptable. We want to change that.”

Axe’s aforementioned research, developed through work with over 3,500 men in 10 countries, shows that despite social progress, men still feel overwhelming pressure to conform to masculine stereotypes — and that male confidence is shockingly low.

“We’re living in an era of unprecedented freedom and acceptance — and yet what we’ve seen is that a lot of men still feel huge pressure to look and behave a certain way in order to be seen as attractive,” says Fernando Desouches, Global Axe Brand Director.

In response, the new positioning and ‘Find Your Magic’ campaign, created with cultural experts and advertising agency 72andSunny Amsterdam, inspires guys to celebrate their individuality, reject archaic, stereotypical notions of male attractiveness, and gives them the tools and inspiration they need to work on their original style.

Kicking off on 18 January 2016, the brand’s new headline campaign – ‘Find your Magic’ – will be a massive multimedia initiative, spanning from TV, print, and outdoor to custom digital content, and more.

Additionally, over the course of the year, Axe will sponsor a wide range of content, all featuring real men with unique and unexpected personal style. This will include the launch of Instagroom, a series of short mobile and online tutorials that instantly answer the real grooming questions guys ask Google, from how to style a mohawk to getting your tie just right.

Along with 72andSunny, Axe will also be rolling out multichannel communication that will launch in 2016 in partnership with key partner agencies Ponce and BBH. AXE has also partnered with leading youth media Company VICE to create content celebrating modern male individuality. Three series will launch across the course of 2016.

“Axe has always been at the forefront of culture. With Find Your Magic we’re out to liberate guys from pressure and bullshit, and empower them to be the most attractive men they can be – themselves,” said Carlo Cavallone, Executive Creative Director of 72andSunny Amsterdam. 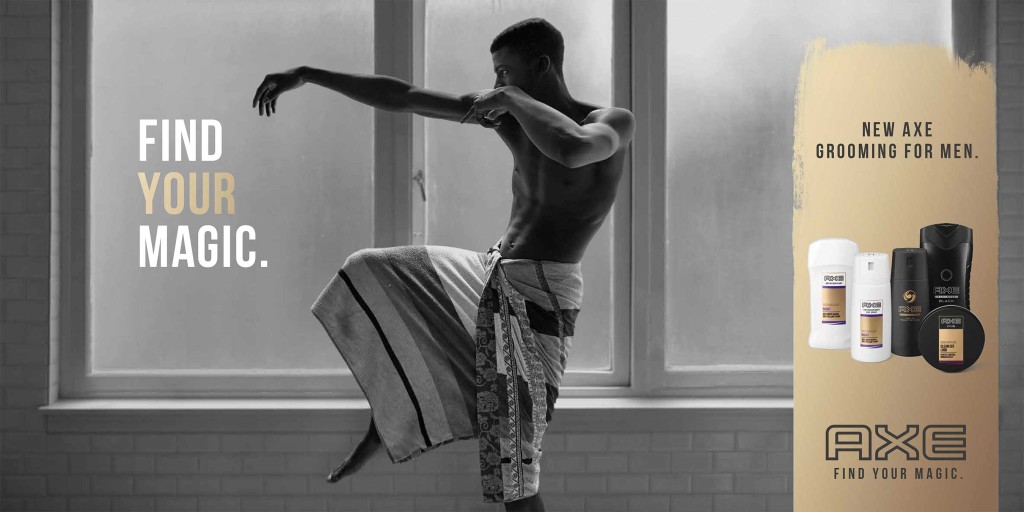