By newsroom on April 22, 2016Comments Off on The Emirates FA Cup Reaches New Heights 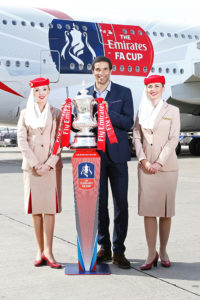 Emirates and the FA Cup elevated the excitement for the tournament with the unveiling of an Emirates FA Cup themed Airbus A380 aircraft. The bespoke design was presented just ahead of the Emirates FA Cup semi-finals which will be held on 23rd and 24th April.

For its maiden voyage, the specially decked out Emirates FA Cup A380 flew to London Heathrow today, operating as EK001. The aircraft was met by former England and Liverpool goalkeeping legend, David James who was pictured welcoming the aircraft with the trophy.

Sir Tim Clark, President of Emirates Airline, said: “We are incredibly proud of our partnership with the FA Cup, the oldest association football competition in the world. Being the title sponsor for the Emirates FA Cup along with our sponsorship of Arsenal shows our deep commitment to the United Kingdom and football. The Emirates FA Cup A380 will literally bring the iconic cup to a fan base spanning the globe. It is exciting for us to connect both football and aviation fans with their passions in this unique way.” 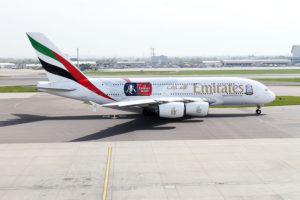 Russell James, FA Marketing Director said: “Thanks to our partnership with Emirates, we’ve been able to inspire and connect with even more fans of teams both here in the UK and across the world. As we enter the finals period, we’re excited to have the Emirates FA Cup branded A380 aircraft flying across the world, helping us continue to bring the adventure of the tournament to new audiences.’’

The Emirates FA Cup emblazoned aircraft will return to Dubai as EK030 and then continue on to Seoul, Madrid, Paris and eventually visit the 37 destinations served by the Emirates A380 worldwide.