By newsroom on October 31, 2017Comments Off on UK Advertising Delivers Strongest H1 on Record

UK advertising expenditure grew 3.7% to £10.8bn during the first six months of 2017, the largest H1 total of any year since monitoring began in 1982. The record investment highlighted in Advertising Association/WARC Expenditure Report data, published today, has led to an upgraded forecast for 2017 of 3.1% growth, which indicates annual spend in excess of £22bn.

Overall market growth is being driven by increased spend on digital advertising. Digital – defined as internet and digital out of home (DOOH) – accounted for 54% of all advertising spend in the first half of the year, some £5.8bn of a total £10.8bn committed by advertisers.

The first half growth was boosted by a 4.0% year-on-year rise during Q2. This was the 16th consecutive quarter of market growth, and the strongest rate since Q4 2015.

Stephen Woodford, Chief Executive at the Advertising Association said: “Spend on advertising is showing strong resilience, at a time of real uncertainty for UK business. We know advertising has a positive effect on the economy, with every pound spent generating six pounds of GDP, so it is good to see steady, sustained growth. The upgrade of our 2017 forecast by a further one percent, the equivalent of an additional investment of £190M, should be seen as a cautious indicator for continued growth in the UK economy.”

James McDonald, Senior Data Analyst at WARC commented: “The latest data highlight the importance of mobile to advertisers in the UK – spend on mobile ads accounted for the entirety of internet growth during the second quarter of 2017 and 97% over the first six months of the year. As mobile usage and credit-fueled consumer spending continue to rise, investment in mobile advertising will track ahead of other platforms this year.”

The Advertising Association/WARC Expenditure Report is the definitive measure of advertising activity in the UK. It is the only source that uses advertising expenditure gathered from across the entire media landscape, rather than relying on estimated or modelled data. 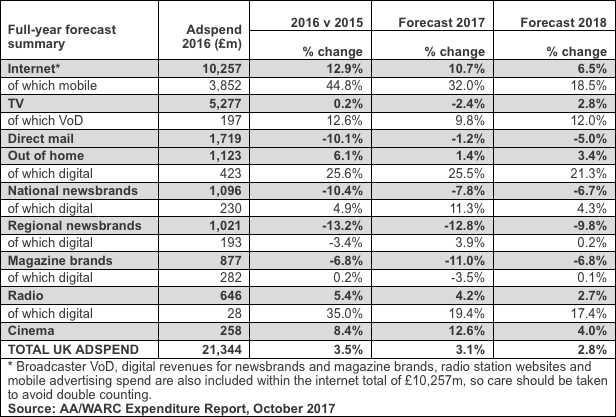 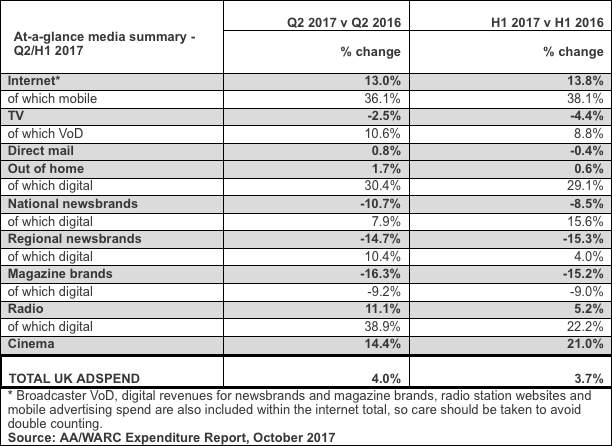