By newsroom on October 11, 2018Comments Off on Virgin Holidays and Virgin Atlantic to fly the rainbow flag across the Atlantic with first ever “Pride Flight” campaign

Virgin Holidays and Virgin Atlantic have released a content-led campaign to announce the UK’s first-ever “Pride Flight” between London and New York City in June 2019 timed to commemorate the 50th anniversary of New York City’s Stonewall Uprising, widely regarded as a pivotal moment in LGBTQ history. 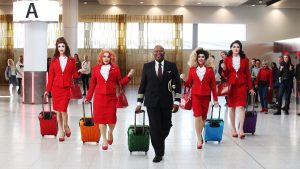 The campaign sees Virgin add a healthy dose of flamboyance to its trademark flair with the sassy piece of content featuring Tituss Burgess – Broadway musical actor and star of the hit Netflix show Unbreakable Kimmy Schmidt – and is an atmospheric preview to promote the special flight. The content piece sees Burgess in Virgin Atlantic pilot uniform, flanked by Drag Queens costumed in the iconic cabin crew uniform, as they strut red-heeled through Gatwick airport.

Burgess will perform on board the flight which will be staffed entirely by LGBTQ+ pilots and cabin crew in true celebration of pride, progress and queer culture 38,000ft above the Atlantic. The flight will feature fabulous on-board entertainment including a DJ, Drag-Queen Bingo, Judy Garland singalong, inter-seat speed dating and special in-flight entertainment to make it one memorable flight.

The campaign is in partnership with NYC & Company and the Alliance for Downtown New York. The flight is designed to celebrate World Pride 2019, which for the first time ever is being held in the United States in New York City. 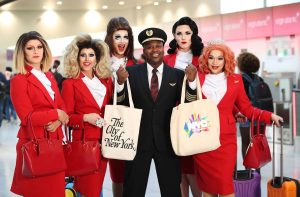 Virgin Holidays and Virgin Atlantic have long been committed to pursuing diversity and inclusion policies.  In 2016, Virgin Holidays launched a three-year plan to become one of the most inclusive companies in travel with a programme addressing employees, customers and the destinations they serve.

The campaign is supported across PR, social media and web, with the content launched on Virgin Holidays and Virgin Atlantic owned channels this week. Edits for Instagram, Instagram stories and YouTube have been created as well as cut-down highlights videos and a huge range of fun social content pieces, which will run to promote the flight between now and June.

Mark Anderson, Global LGBT Lead for Virgin Group and Executive Vice President at Virgin Atlantic commented: “We’re not the type of company to mark an occasion like the 50th Anniversary of the Stonewall Riots and World Pride coinciding in New York City half-heartedly and we’re going to be pulling out all the stops to ensure the Pride Flight is delivered with a large serving of Virgin flair.  We take our commitments to diversity and inclusion seriously, but you can rest assured we have a lot of fun along the way.  This is going to be a show-stopping, ground-breaking, one-of-a-kind experience that we can’t wait to bring to the skies next June.” 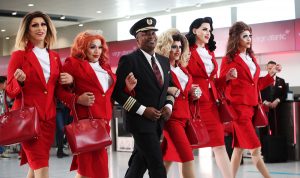 Kat Thomas, Founder and Executive Creative Director of One Green Bean, added: “Developing the creative and the PR strategy for the launch of the Pride Flight has been brilliant, a dream brief. The Virgin commitment to celebrating diversity is unapparelled and as an agency we couldn’t be prouder to be flying the flag too.”

A portion of ticket sales from the flight will be donated to The Attitude Magazine Foundation to advance community Pride initiatives here in the UK – and further fundraising and raffles will take place on-board.

Virgin Holidays and Virgin Atlantic to fly the rainbow flag across the Atlantic with first ever “Pride Flight” campaign added by newsroom on October 11, 2018
View all posts by newsroom →