By newsroom on August 15, 2018Comments Off on WCRS and Born Free highlighting the elephant crises in Africa with striking OOH and social campaign

One elephant is killed in Africa every 25 minutes. That works out to be 55 in a single day. If this is to continue, there will be no more elephants in the wild within two decades. 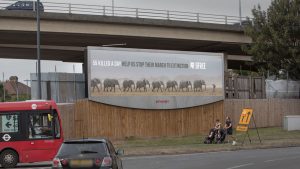 World Elephant Day, is a day dedicated to the preservation and protection of the world’s elephants. However, with every year that passes the presence of elephants in the world declines. This is due to the brutality and persistence of poachers, fuelled by the ivory trade.

This is simply, a fact that people need to know about. WCRS, Engine’s creative agency, were tasked with both raising awareness of this and driving people to donate to Born Free in order to fund anti-poaching patrols and elephant research in Africa. To give this shocking statistic maximum impact, the campaign powerfully brings to life the scale of daily loss and dramatises the passing of time, in executions across OOH and social.

The sheer number of elephants that are killed has been represented with a long line of 55 elephants marching to their death, with a poacher taking aim at the front of the line, shot by photographer George Logan. 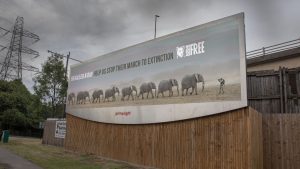 To represent the passing of time, and the fact that elephants are being brutally murdered into extinction, a beautifully crafted animation of an elephant in an hourglass will also be promoted across social. The gradual falling of sand through the hourglass is a powerful representation that if we do nothing, elephants in the wild will be a thing of the past.

Will Travers OBE, Born Free’s Co-Founder and President, said: “In a time of sensory overload where news and images come at all angles, it is hard to make your mark. However, the extraordinary ‘55 elephants and man with gun’ image has done just that. An extraordinary concept. An extraordinary outcome.” 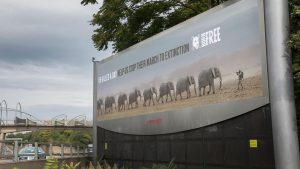 Grant Parker, Creative Director and Head of Art at WCRS said “Born Free is a client that is doing such significant and vital work. It has been hugely humbling to be able to help them raise awareness on such an important issue. And to know that the work we’ve created has had tangible results is very rewarding. Finally, my 6 year old will understand what I did at work today.”

The work generated donations of over £3,300 as well as 20 elephant family adoptions.

The campaign launched on the 12th August, World Elephant Day, with OOH sites in London, Leeds and Manchester, kindly donated by Clear Channel and Primesight.

WCRS and Born Free highlighting the elephant crises in Africa with striking OOH and social campaign added by newsroom on August 15, 2018
View all posts by newsroom →