By newsroom on July 13, 2018Comments Off on Wimbledon Champions Are Reimagined in Botanical Splendour

Wimbledon’s new campaign takes a detour from the cheering crowds and strawberries and cream to focus on a quieter but no less iconic aspect of its experience: the gardens. Directed by EspadaySantaCruz, its new advert ‘The Gardens’, reimagines Wimbledon through the eyes of defending champion, Garbiñe Muguruza.

The enchanting 60-second film was created by McCann//Craft, produced by 1stAveMachine and brought to life in post production by ENVY Advertising. In ‘The Gardens’, Muguruza highlights Wimbledon’s English garden charm, which makes it so unique for competitors and spectators alike. 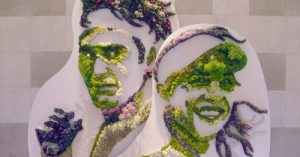 Production company 1stAveMachine worked closely with Madrid-based creative studio EspadaySantaCruz to create living portraits of Roger Federer and Muguruza herself in a way that reflects the precision and relentless hard work of the horticulturalist team who create Wimbledon’s renowned displays.

The portraits had to be created in specific Wimbledon brand colours using the right species of flowers that were authentic to Wimbledon displays. 1stAveMachine worked with an illustrator for the portraiture, then projection mapped these images onto the basic structure so that the horticulturalists could accurately plot the flowers and grasses in the exact positions for each flower arrangement.

Isabella Parish, Managing Director and Executive Producer at 1stAveMachine comments: “When it came to shooting the spot, one of our challenges was replicating the movement of the sun from dawn to dusk in the time-lapse macro shots of the flowers growing. This meant that we had to calculate the movement of the studio lights, as though all the action was happening in one day, when really each of these shots took three weeks.”

She continues: “We used sensitive robotic arms to control the moving cameras and lights across the time-lapse and this movement was replicated in the live action shots with motion control. We had to regulate the temperature, light and atmospheric conditions for the flowers to bloom – and they bloom in unpredictable ways and directions – so we shot multiples for the perfect take. The elaborate watering system that you can see in the film also needed to be integrated beautifully into the structure of the display.” 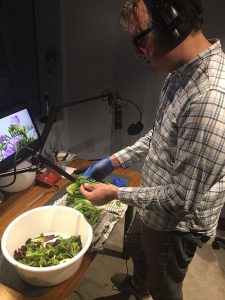 ‘The Gardens’ marks ENVY Advertising’s second project for this year’s Championships – the first being ‘Sounds Like Wimbledon’. For this latest advert, the full-service post production facility was responsible for crafting a rich grade to complement the film and for creating a soundscape to underline Muguruza’s narrative development. Sound Designer, Rich Martin, wove together the sounds of nature which gradually become replaced with the roar of a cheering crowd.

Rich Martin, Senior Sound Designer at ENVY Advertising comments: “We wanted the sound to help give the time-lapse images a sense of real-time growth. Foley recording was the only technique that could achieve this, so we went to work doing terrible things to asparagus, lettuce and other unfortunate vegetables of Berwick Street Market’s fruit and veg stall. These were some of the quietest sounds I’ve ever recorded. For it to feel authentic, the sound had to be almost invisible in its subtlety. The ‘pop’ of a lily flower bursting into bloom was replicated with the leaves of a spring onion bouncing off a Jerusalem artichoke. If we did our job right, we’d hope that the viewer would not give the sound a second thought. On this project, it was important to get the detailing correct, to allow the audience to believe the extraordinary images.”

‘The Gardens’ is part of Wimbledon’s wider campaign this year, which kicked off with the trailer and was followed by an OOH campaign. It is part of a series of content films rolling out on social media that focus in greater depth on three key areas of Wimbledon: the gardens, the ticket resale scheme, and the famous queue.

Wimbledon Champions Are Reimagined in Botanical Splendour added by newsroom on July 13, 2018
View all posts by newsroom →