By newsroom on July 30, 2013Comments Off on X marks the spot – a new identity for Oxford Street 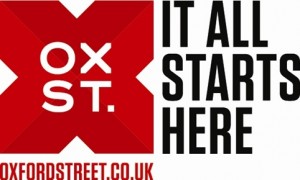 London’s Oxford Street is set to launch a new identity, developed by Goosebumps Brand Consultancy, which uses an ‘X’ to ‘mark the spot’.

The new identity is based around the proposition ‘it all starts here’. It sees the Oxford Street name shortened to Ox St.

Goosebumps was appointed to work on the new branding by the New West End Company, and has looked to ‘reignite London’s love affair’ with the shopping street.

The branding, which is described by Goosebumps as ‘bold and unapologetic’, is primarily aimed at shoppers, but will also have a business-to-business role. It was developed following research with shoppers, retailers and other Oxford Street stakeholders.

Simon Cotterrell, strategic partner at Goosebumps, says, ‘We wanted to get the street to think of itself as not just the route from Centrepoint to Marble Arch, but also the 100m north and south. Then it becomes the world’s biggest mega-mall, with shops, restaurants and galleries.

‘The “It all starts here” line allows for flexibility, so it can be used with “lunch starts here”, or “Sundays start here”.’

Cotterall adds, ’The identity itself came from that. It’s minimal, bold and simple. The “X” itself is used in the word Oxford, it’s used on treasure maps to mark the booty and it also links to the “X” crossing outside Oxford Circus.

‘We’ve designed the identity with a lot of flexibility – in future it can be a window for ither images, it can be an outline, it can be used multiple times or it could have physical iterations.’

The new identity comes as Oxford Street is redeveloped for the launch of Crossrail – expected in 2018. NWEC is also aiming to create a strong brand for the area to counteract pressures from Westfield’s retail sites in east and west London.

The new identity will launch in a marketing campaign during London Fashion Week in September.

X marks the spot – a new identity for Oxford Street added by newsroom on July 30, 2013
View all posts by newsroom →