By newsroom on February 23, 2018Comments Off on Amazon plans to open up to six more cashierless Amazon Go stores in 2018 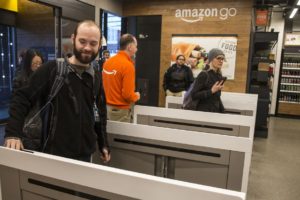 plans to open as many as six more cashierless stores in 2018, according to a report.

The e-commerce giant is considering locations in Los Angeles and hometown Seattle, where the first Amazon Go store opened in January, Recode reported, citing people familiar with the situation.

Amazon Go is the company’s most ambitious effort to change the way people shop and a play for the struggling $550 billion U.S. convenience store industry. It’s part of the company’s larger brick-and-mortar ambitions, which include a stepped-up push into groceries with the Whole Foods Market acquisition as well as the opening of about a dozen book stores in such cities as Los Angeles, Chicago and New York.

To enter the Amazon Go store, customers download a smartphone app and scan a QR code to open a glass turnstile. Those shopping in a group scan the account holder’s phone once for each person entering and sensors will associate them with that account. From there, machines take over, watching the items plucked from shelves and adding them to a shopping cart. Shoppers are billed once they leave and if there are any mistakes or the customer isn’t happy with an item, you push a “refund” button to have that item removed from the bill. Shoppers don’t have to return an unwanted item to the store to get a refund.

Amazon plans to open up to six more cashierless Amazon Go stores in 2018 added by newsroom on February 23, 2018
View all posts by newsroom →