By newsroom on October 22, 2015Comments Off on Back to the Future fans are messaging with Doc Brown on Facebook 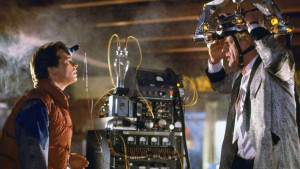 Universal Studios is hoping to drive sales for the 30th-anniversary edition of the Back to the Future film through an interactive Facebook messaging campaign in which users can converse with the Doc Brown character from the franchise.

The film studio is rolling out all the stops to celebrate this year as the year of the future, which Doctor Emmett Brown and Marty McFly travel to in the classic Back to the Future film including a DVD rerelease, Blu-ray edition and in-theater launch. To hype up the trilogy relaunch Universal created an experience via the Facebook messenger application for fans to converse with Doc Brown through his famous Brainwave Analyzer.

“The Doc Brown messaging campaign signals the new trend away from traditional advertising and marketing,” said Eyal Pfeifel, the co-founder of Imperson, the technology behind the feature. “Advertising is a one-way interaction and millennials, in particular, are less receptive to these traditional channels, they often resent being shouted at by marketers and advertisers.

“Ads have become more of a nuisance that we try desperately to avoid,” he said. “We now see that consumers are now looking for an interactive and engaging experience, something they can feel a part of. Today, there are over 2B active messaging users worldwide and as a result, one-on-one messaging campaigns can deliver an experience that fits seamlessly into existing, natural behaviors like messaging with friends. This allows for the ability to build more meaningful interactions that are long-lasting and far more effective. Consumers can now speak with their favorite brands.”

The future is now 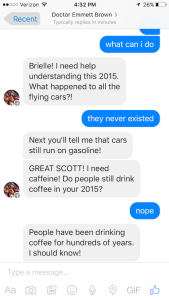 Back to the Future fans are getting an exciting experience and are able to become a part of the plotline to celebrate the films’ 30th anniversary. Doc Brown has just reached 2015 from his time travel journey from 1985 with Mary McFly, and has converted his Brainwave Analyzer to transform speech into text.

Facebook messenger users are helping the character through the new, current version of 2015 by explaining the differences of the 2015 in the movie versus today’s present day. Fans simply message the Facebook Page of Doctor Emmett Brown to start the conversation.

Doc Brown responds with questions such as inquiring about where the flying cars have gone and why the coffee sizes are differently named. The comedic innovation pokes fun at common topics in present day.

The feature is powered by Imperson technology for an automatic, interactive conversation. The campaign will last until October 31.

The Back to the Future films were first released starting in 1985 and are known as classics in entertainment and film. The anniversary and celebration of what was originally featured as the futuristic date was a trending topic during this week. 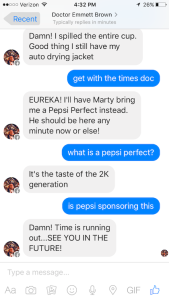 Universal Studios also engaged more than 100,000 consumers and drove awareness for recent horror film Unfriended by enabling users of the Facebook Messenger application to communicate with one of the movie’s characters.

The film studio also created a unique innovation by tapping into recently released film Everest’s breathtaking imagery for a mobile virtual reality platform that digitally transports users to the mountain.

“The AI-powered Doc Brown was built to engage fans interactively by letting them take part in the story line,” Mr. Pfeifel said. “And while the messaging campaign is certainly intended to entertain Back to the Future fans in celebration of the 30-year anniversary, the true goals are two-fold.”

“First, the campaign set out to raise brand awareness through social sharing, and help revive interest in a series that’s decades old,” he said. “Second, the Doc Brown bot is programmed to steer conversations to a call-to-action. Users will be sent a link to a Universal-branded Back to the Future page where they can learn more about the series, watch video clips and ultimately purchase the DVD Trilogy set,” added Pfeifel.

Back to the Future fans are messaging with Doc Brown on Facebook added by newsroom on October 22, 2015
View all posts by newsroom →