By newsroom on October 5, 2018Comments Off on Boys + Girls Promise “Fullfullment” as they Reveal the Cult of McDonnells Curry Sauce 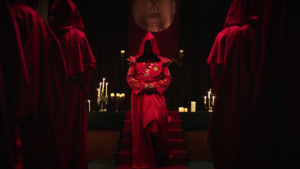 In their latest instalment, the fourth in the series, Boys + Girls finally lift the lid on the underground practices of the McDonnells curry cult and those that give themselves openly to a life filled with Chippus Currius and finding “The Secret of Fullfullment”.

Reflecting the cult-like status the brand has achieved in over three decades, the TV film opens in a darkened, candle-lit setting where we encounter a mysterious group of hooded people wearing elaborate red robes and chanting the words “Chippus Currius”.

Shot on location in Bulgaria by Pull The Trigger’s Chris Cottam, Oscar winning graphic designer Annie Atkins created the Sigil (magic symbol) that features so prominently in the imagery while John Walsh on music “whipped the cries and OOOH’s of joy” from the cult followers into one melodious earworm.

Kris Clarkin, Creative Director, Boys + Girls said: “McDonnells is the only choice for true believers who want the finest curry sauce. It’s one of the reasons that it’s leader of its category. We have reflected that fervent enthusiasm for the brand in an eye-catching piece of work that uses intrigue and comedy in equal measure to grab attention and get noticed.”

Boys + Girls Promise “Fullfullment” as they Reveal the Cult of McDonnells Curry Sauce added by newsroom on October 5, 2018
View all posts by newsroom →