By newsroom on September 16, 2015Comments Off on ChinChin, the wrestling cholita, is the main character in El Ojo 2015’s new ad campaign

The international festival has already become a classic, and as every classic it is mostly expected. The agency, Santa Clara, and the production company, O2, have just released the new advertising campaign for the 2015 edition of El Ojo de IberoamÃ©rica. In this case, the protagonist of this short film is a real artist, a real wrestler. 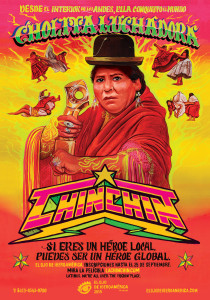 The wrestling cholitas are women that fight in rings in Bolivia, using traditional customes. The campaign tells the story of one of those women: ChinChin, a local hero that travels to Buenos Aires to participate in El Ojo Morado (The Black Eye), a competition that gathers the best wrestlers in Latin America. With no recognition in the beginning, ChinChin end up conquering the whole region becoming a global hero. The story illustrates how â€œif you are a local hero, you can be a global heroâ€. The campaign also announces the final deadline to register the best ideas, works and cases in El Ojo de IberoamÃ©rica: September 25.

â€œEl Ojo ad commercials have become a tradition in the agenda of regional campaigns thanks to the ability and good ideas of Santa Clara and its partners, and also because of what the festival represents and inspires in the creativity world,â€ insures Santiago Keller Sarmiento, President of El Ojo de IberoamÃ©rica.

â€œTwo years ago we established a global concept for El Ojo saying â€œLatinos, We are all over the fuckin placeâ€. This campaign has been taking different shapes every year. In 2015 has the insight of El Ojo, event and award, as a catapult, kind of a trampoline to the world. We will always see in Cannes, what stood out the year before in El Ojo. Having this promise as a base, we discovered and chose a Latin story, a fable, the one of a local hero that becomes a global hero,â€ says Fernando Campos, Chief Creative Officer of Santa Clara.

With a duration of 2:50â€™â€™, â€œChinChin, the wrestling cholitaâ€ film has the direction of Marcus Alqueres, from O2 Filmes, and mini-documentary format. The shooting took place in Bolivia, land of cholitas like ChinChin, women on typical customes, like the â€œpolleraâ€, of five layers, a bowler hat, jewelry and mantles woven thoroughly. This kind of wrestling became an important part of the lives of some of these women in 2002, when the organizers of these events decide to invite women. No one knows exactly who was the creator of the wrestling among cholitas, but it became a tradition within Bolivian wrestling.

â€œIt was a really fun script to shoot with a fine production where everyone had fun in the process, a combination that shows in the final result,â€ declares Marcus Alqueres, film maker of O2. Besides the film, the campaign has a hot site, banners, prints and social media activation.

â€œChinChin, the wrestling cholitaâ€ joins the list of unforgettable campaigns created by Santa Clara to celebrate and spread the main role of El Ojo de IberoamÃ©rica as a worldwide creativity meeting with regional seal, authentically Latin.

Pieces from Fernando Campos’s team that became classics as Cerveza El Ojo (Beer El Ojo), that used Cannes Festival long list as media to promote El Ojo 2011; the film Three Little Pigs that made possible for people to create different finals for this traditional tale in El Ojo 2008; and the video clip â€œLatinos, We are all over the fucking placeâ€ that used an irreverent song composed by Jair Oliveira, Gabriel Spinosa and Rafael Silvestrini, from S de Samba, and images inspired in the Italian painter Caravaggio to strengthen the representativeness of the region in the global creative industry in El Ojo 2014.

ChinChin, the wrestling cholita, is the main character in El Ojo 2015’s new ad campaign added by newsroom on September 16, 2015
View all posts by newsroom →