By newsroom on August 10, 2017Comments Off on George at Asda launches ‘Strong Clothes for Strong Kids’ campaign by Saatchi & Saatchi London

Running until September 4th, George at Asda will be rolling out its Back to School campaign ‘strong clothes for strong kids’.

The integrated campaign by Saatchi & Saatchi London, aims to highlight the small but significant challenges that children encounter and overcome at school on a daily basis, no matter what age they are. It taps into customer insight that life beyond the modern school gates is an unknown for parents. As children step into their own world and stand on their own two feet they become much stronger than we think as they go about their daily tasks. 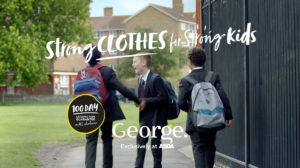 “We want our children to been armed with both the physical and emotional tools to cope with everything the school day has to throw at them and the campaign reflects that having good quality, tough-wearing uniform plays a big part in this,” said the agency in their release.

The 30″ TV spot follows three schoolchildren, all of differing ages, and each of whom face a different challenge. The first is a young girl in the school playground, deliberating at the top of a slide whether she’s brave enough to go down. The second child is new to the class and after standing on the side-lines looking on, finally plucks up the courage to ask to join in a playground game. The last is challenged by an older group of children to kick a football back to them and the pressure of getting the kick spot on is immense! 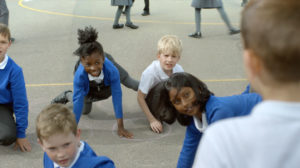 Andy Murray, Asda’s Chief Customer Officer said: “We wanted this campaign to really reflect the human truths associated with the everyday challenges of school children and how they positively overcome them by being much stronger than we think. As adults we can only prepare our kids for what happen beyond the school gates and robust school uniform is an essential part of their everyday armour. From parents sending their little ones to school for the first time, to those starting new schools and meeting new friends – the campaign is designed to relate to the nation as families prepare for a new school year. I am incredibly proud of our back to school range which, coupled with our 100 day guarantee, provides our customers with one of the strongest offers in the UK.” 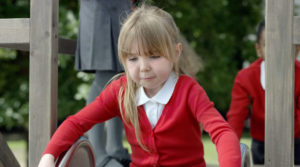 The 30″ TV spot will be played out until September 4th, with a 60″ long form showing in cinemas across the country alongside additional 10” digital pre-roll and 6” & 2” social cut- downs. The campaign will also be supported by print, display and online.