By newsroom on June 4, 2018Comments Off on GIL highlights offensive and discriminatory use of the R-word in new campaign

GIL, a Swedish organisation that fights on behalf of people with disabilities, unveiled a provocative new campaign with creative agency, Stendahls.

Title “Said by Retards”, the campaign highlight the issue of how the offensive and discriminatory R-word is used – and make people aware that having an intellectual disability isn’t the same as being strange, or stupid.

“At GIL, we want to shine a light on that it’s unfair to be generalised and associated with the real idiots in the world,” says Anders Westgerd, director at GIL.

Instead of assuming the role of the victim they decided to use attitude, humour and a lot of self-awareness to prove a point. 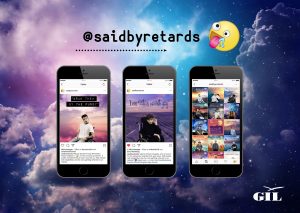 The movies are packaged as classic “inspirational quotes”, raising the question: Who are the real retards?

GIL highlights offensive and discriminatory use of the R-word in new campaign added by newsroom on June 4, 2018
View all posts by newsroom →