By newsroom on March 18, 2016Comments Off on Latinos Admit to Being ‘Murderers,’ ‘Traffickers’ and ‘Thieves’ in Anti-Trump Ad

The CHIRLA (Coalition for Humane Immigrant Rights of Los Angeles) Action fund has turned candidate for the Republican nomination for President of the United States, Donald Trump’s statements about Latinos against him in a new spot. 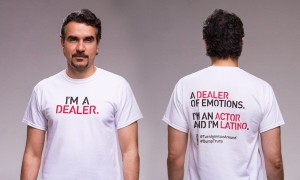 The ad features various Latinos “owning up” to the characterizations Mr. Trump had made of them as dealers, killers, murderers, attackers, traffickers and thieves, each wearing a t-shirt with those titles. “I am a dealer,” “I am a killer,” “I am a thief,” “I am an attacker,” they say.

But as each turns around, they reveal their true identities: the “trafficker” is actually a trafficker of stories — a film director; the “murderer” is a murderer of boredom, a comedian; and the dealers include a dealer of flavors (a chef), a dealer of care (a nanny) and a dealer of justice (an attorney) and so forth. 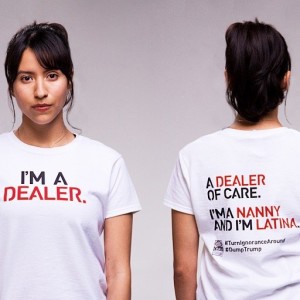 General and multicultural agency Walton Isaacson came up with the ad, whose production began at the end of last year. “We are very committed to minorities … and we believe that there’s an urgent need right now to speak the truth and confront negative racial stereotypes,” said GCD Martin Cerri. “So this idea came up organically, while we were discussing about different target audiences that we represent at the agency.”

The ad took about three months to pull together, from ideation through production. All those featured in the ad are real people — “It was a process kind of similar to what you do when you approach a focus group,” Mr. Cerri said. “It was not a normal casting, we didn’t look for the perfect delivery, we looked for a range of real people with a big range of different occupations in order to make our point.”

The ad directs viewers to an accompanying site, where they can see the film and purchase their own t-shirts re-framing Trump’s pejorative characterizations.

Latinos Admit to Being ‘Murderers,’ ‘Traffickers’ and ‘Thieves’ in Anti-Trump Ad added by newsroom on March 18, 2016
View all posts by newsroom →