By newsroom on January 24, 2014Comments Off on Bloomberg TV targets London’s professionals with brand campaign 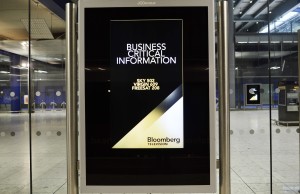 The month-long digital campaign, named Start Smart, will highlight the channel’s morning programmes â€˜Countdownâ€™, â€˜On the Moveâ€™ and â€˜The Pulseâ€™, along with the networkâ€™s regional anchors.

Digital screens will run a series of four 10-second and four five-second animated ads, which represent the European-focused programmes, at major national rail and underground stations between 6-10am and 4-7pm.

Damian Totman, ECD of Bloomberg’s Internal Agency, which developed the campaign, explained: “The ‘Start Smartâ€¦’ campaign carries the strapline ‘Business Critical Information – From 6am’ and reaffirms both Bloombergâ€™s strengths and the extraordinary commitment of the team who contribute to the channelâ€™s output. The creative executions place an emphasis on equipping viewers – from the moment they open their eyes – with the critical information they need for the day ahead.”

Additional spots will run 24/7 at screens in more than 100 offices across the City, at the Bloomberg Hub at London City Airport, and on the platforms at Heathrow terminals one to five. A series of print ads are also being rolled out.