By newsroom on September 18, 2013Comments Off on Ensequence To Roll Out National Platform For Interactive TV Advertising

Interactive advertising service company Ensequence will roll out an ambitious broad-reaching national platform for interactive TV advertising. AdConneqt+ enables programmers to offer an interactive upgrade to their 30-second ad inventory, where TV viewers can respond to national advertisers’ 30-second spots after a few clicks of the remote control. 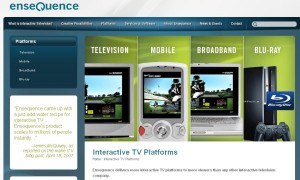 The company says AdConneqt+ has the potential to reach over 75 million television homes and can be used across cable, satellite, telco television distributors and smart TVs. According to reports, the new service will start up with 20 million interactive TV homes and will grow to almost 40 million by the end of the 2014.

AdConneqt+ will start up in the first quarter of 2014, the company says, with “an array of partners, including cable operators providers, telco distributors, and smart TV manufacturers.” A report says it already has some deals done.

Ensequence To Roll Out National Platform For Interactive TV Advertising added by newsroom on September 18, 2013
View all posts by newsroom →