By newsroom on August 14, 2017Comments Off on Heinz Brazil’s Clever Instagram Campaign By Africa Lets You Eat Delicious Posts

The so-called “Irresistible Posts” campaign, created by ad agency Africa with the support of Facebook Creative Shop, kicked off in Sao Paulo and used geolocation to target local users. 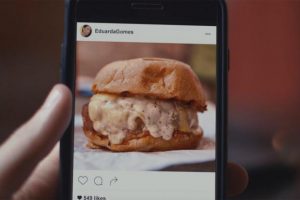 People looking at Stories in Instagram around lunch time found video of burgers made by chef Santi Roig from Underdog Meat & Beers restaurant. The chef then entered the scene and prompted people to do more than have their mouths water.

By making an upward movement on the screen they could order the burger, which Heinz would then deliver to them in a personalised box, accompanied by some of the brand’s own products. To whet appetites even more, Heinz sent videos and photos of the creative process of making each sandwich to the respective recipients live via direct message.

“We decided to turn people’s craving into reality,” Heinz Marketing Director Isabella Rizzo, explains in a statement. “Irresistible Posts innovate in the way people consume content: by eating it with Heinz.”