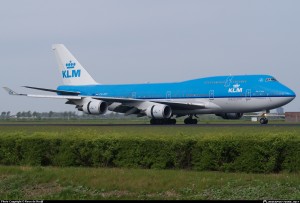 Jongerius has worked across all interior touchpoints, including on the new fully-flat seats, and her work has included new carpeting, decorations, curtains, lighting and blankets.

KLM says the guiding principle of the designs has been ‘to ensure that passengers feel at home on-board’. It says it has aimed to move away ‘from a business-like look to a greater sense of being at home’.

The new interiors use the KLM blue colour, but Jongerius has expanded the palette and introduced new colours.

Jongerius has also worked on the new seats, which are B/E Aerospace Diamond Seats, which can recline fully horizontally. The seats feature new textiles and dot graphics.

Carpets, meanwhile, are made partly from discarded KLM uniforms.

Jongerius said, “It is truly remarkable that KLM is open to this kind of approach for its interior. Aircraft interiors have to meet an unbelievable range of technical requirements. We achieved this by simplifying the new seat, changing its colour and upholstering it with high-quality textile.”

The new designs are set to launch in July in KLM’s fleet of Boeing 747-400 aircraft. It will then roll out to the airline’s fleet of 777-200 aircraft.