By newsroom on October 30, 2015Comments Off on Jeremy Clarkson can’t resist dig at BBC in Amazon Fire TV ad

Jeremy Clarkson, the former BBC Top Gear presenter, has made light of his dramatic exit from the corporation earlier this year in a new ad for Amazon.

Amazon’s new ad by Lucky Generals for the Fire TV Stick will air tomorrow during the Rugby World Cup Final.

Clarkson, the former Top Gear presenter who famously left the BBC in disgrace earlier this year, has been signed up by Amazon to present a new show alongside Richard Hammond and James May.

In the ad, a scooter-riding Clarkson says to the viewer: “Back in the spring, as you probably remember, I suddenly became un-busy.” 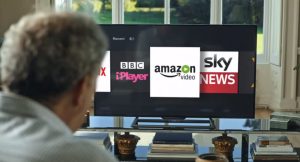 The presenter then explains that he was able to fill his free time with a Fire TV Stick, which plugs into the TV and gives you access to on demand television.

In a further dig at his former employers, he says the TV Stick has “everything you could possibly want – Demand 5, Netflix…” and when BBC iPlayer pops up on the TV screen, he just shakes his head and says “that”.

There is even an ad within an ad, as a still for the new Clarkson/Hammond/May TV show appears on screen, prompting Clarkson to claim that the product is “perfect”.

Clarkson was told in March that his contract with the BBC would not be renewed after an internal investigation found the presenter had physically and verbally assaulted Oison Tymon, a Top Gear producer.

Lucky Generals joined the Amazon roster in August last year and created the e-commerce giant’s first UK ad for Fire TV in October. The new ad was directed by Steve Reeves through Another Film Company.