By newsroom on March 20, 2013Comments Off on Mobile Driving More ESPN Traffic 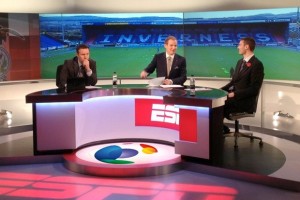 There is at least some evidence showing that ESPN is starting to derive more digital traffic from mobile devices than from a PC or laptop.

In at least one month among men 18-plus, 18 million accessed ESPN content via just a mobile device, compared to 16 million using only a PC or laptop.

The data from cross-platform research conducted by comScore and Arbitron further shows that 9 million used both options.

The numbers are slightly reversed for the general population as 26 million used just a laptop or PC, topping the 24 million with just a mobile device. The data shows 12 million used both.

comScore and Arbitron are in the early stages of Project Blueprint, a study on ESPN content consumption across five platforms and the digital data was released Monday at the Advertising Research Foundation conference.

The two research companies are combining their different capabilities and research methods to gather data across TV, radio, tablets, smartphones and PCs/laptops. 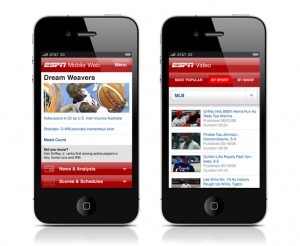 Arbitron is using a panel of 2,000 (a subset of the 70,000 in its national Portable People Meter sample), while comScore is turning to census-based methods.

Not everyone participating in the research has access to all the devices. The Arbitron panel includes 469 people who only own a radio or TV.

There are 241 who have a computer, tablet and smartphone, while 93 people speak only Spanish.

Arbitron and comScore plan to conduct extensive research during April, May and June and report more results in June.

ESPN research executive Glenn Enoch said Monday at the presentation one aim of the study is feasibility: measuring use across a single platform is doable, but finding duplicated and unduplicated reach across five is a different matter.

In general, as with most media research, he said the goal is to determine how may people use certain platforms, how often and for how long.