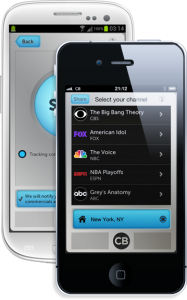 Commercial Break is a new app launched onto the market this week aimed at those who spend ad break hopping channels, only to go back to their programme and realise they have missed half of it.

The free iPhone app alerts viewers in real time when their TV programme comes back from commercials by using Digital Signal Processing to automatically distinguish between TV advertisements and programs.

Algorithms identify the end of commercial breaks by analysing dozens of cues from audio and video signals, 40 times per second.

“The average American sees more than ten hours of commercials every week. Commercial Break is two Israelis’ attempt to help them take back that time,” said Commercial Break co-founder and CEO Haim Kairy.

“The idea came to me after channel-surfing one day: I realized that my co-founder, Eli Ben David, and I could apply our backgrounds in engineering and sound production to automate the tedious channel-flipping that we all do while waiting for our program to come back from commercials.”

To use the app, viewers simply select the channel they’re watching to start getting instant alerts when commercials end.

After its public beta, the company plans to expand to additional US cities and make the app available for Android.