By newsroom on September 23, 2013Comments Off on Newsworks launch ads underlining the value of newsbrands 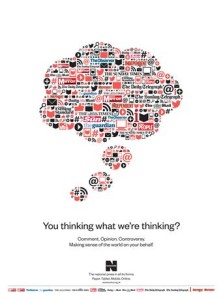 The campaign aims to highlights the distinctive and important role that newbrands continue to play in our lives.

Each ad attempts to represent a distinctive characteristic of newspapers and their accompanying websites and digital editions.

The ads highlight the growing audience of this multi-platform industry, its fluid relationship with social media and the age-old investigative role of newspapers in exploring and exposing current issues, including the NSA files, MPs’ expenses and Stephen Lawrence’s murderers. 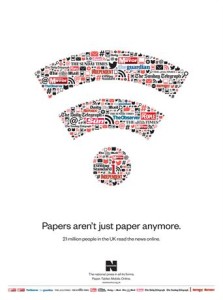 Lloyd worked alongside contemporary designers Tappin Gofton, best-known for their work with Coldplay, the Chemical Brothers and photographer Nadav Kander, to produce the series of ads, which highlight newspapers’ transition to multi-media newsbrands.

The six ads are running in the Guardian, The Independent, London Evening Standard, Daily Mail, Daily Mirror, The Sun, The Times and The Daily Telegraph, as well as their Sunday siblings, across print, online, tablet and mobile.

The ads are running as colour pages, banners and MPUs.

Rufus Olins, chief executive, Newsworks, said: “We hope the campaign reminds people that newspapers across all platforms continue to play a hugely important and influential role.

“There has been a lot of criticism of the industry and these ads tell the other side of the story. We’re thrilled with the commitment and work from John Lloyd and Tappin Gofton.” 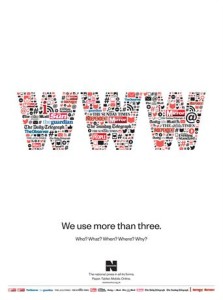 If Rufus had asked me to write a newspaper advertising campaign to promote ‘newsbrands’ a few years ago, I would have thought he was mad. But, working with him closely for the last 12-months, my perception of the industry has totally changed. I now understand and fully support his vision to promote the press, not as mere paper but as essential multi-media newsbrands. A world without newspapers is truly unspeakable. I hope the campaign changes perceptions and makes people think. Newspapers are a vibrant and innovative business, full of dedicated and passionate people, an industry that I have come to both love and admire.

Newsworks launch ads underlining the value of newsbrands added by newsroom on September 23, 2013
View all posts by newsroom →