Peperami, the sponsor of the Professional Darts Corporation, is launching a dedicated social TV channel hosting behind the scenes content and social banter live from the William Hill World Darts Championships, which launches at Alexandra Palace in London this week.

The second-screen social channel, Animal’s Arrows, is devised and created by Havas Helia. Launching today, Thursday, 17th December, the site gives fans the opportunity to enjoy all the darts revelry they don’t get to see on TV. 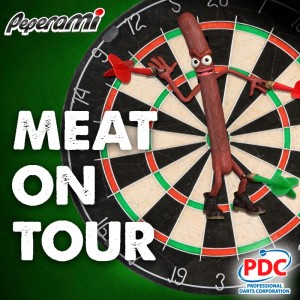 Peperami’s mascot of mayhem, Animal – who will be making a daily appearance at the tournament – will also take over players’ social accounts. The resulting tweets and messages will be aggregated on Animal’s Arrows here.

As well as darts chatter, there’s a #WalkOnTheDartsSide social competition, celebrating the player ‘walk-on’. Followers are invited to name their would-be walk-on song for a chance to win.

The most retweeted or shared entry wins the star prize – a trip for two to Shanghai, China. In addition, there will be other giveaways including signed dartboards, VIP tickets, and the chance to walk-on and play Animal at the Ally Pally final on Sunday, 3rd, January, 2016.

Animal’s Arrows gives fans the chance to continue the banter beyond their TV screen and, for those without Sky Sports, get an entry point to all the action. The four-week campaign aims to increase Peperami’s social reach, build its following, and make Peperami synonymous with darts.

Animal’s Arrows will also promoted across social media, in the PDC printed programme, on-screen in the Ally Pally auditorium, and on the PDC website.