By newsroom on October 11, 2018Comments Off on Shekhar Kapur and Parminder Nagra Launch Animation with WaterAid on Impact of Water Crisis on Girls

Acclaimed Indian film director, Shekhar Kapur has collaborated with international charity WaterAid to create a short animation, Brides of the Well, adapted from a story written by Shekhar to highlight the impact of the water crisis on women and girls globally. 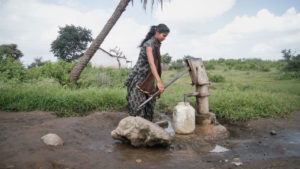 Narrated by Bend it like Beckham and ER star, Parminder Nagra, the film tells the story of Saraswati and Paras; two teenagers living in Punjab, northern India, who are forced into child marriage and a life of servitude, centred round walking long distances to collect water for their ageing husbands. It launches on 11 October to mark International Day of the Girl.

Globally, 1 in 9 people lack access to clean water. India has a staggering 163 million people – and roughly 81 million women – living without clean water close to home, making it the country with the highest population without this basic resource.

This crisis affects women and girls disproportionately throughout their lives as they bear the burden of walking long distances to collect water, often forcing them to drop out of school from an early age, missing out on their education and – in some cases – making them vulnerable to child marriage. Girls with no education are three times more likely to marry by 18 as those with secondary or higher education. 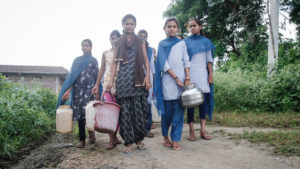 Shekhar Kapur’s Brides of the Well animation is based his own observations of life in India. While walking to the distant well, the two teenage girls discover they are in love with the same boy. At first enraged by jealousy, the girls overcome their rivalry, united in their dream that one day they will be freed from marriage and the daily chore of collecting water.

Shekhar commented: “Water is one of the world’s most precious resources. But for those who live with water on tap it can be difficult to imagine how life would be if water wasn’t so accessible. That is why I wanted to tell the story of Paras and Saraswati and show how people across the world live every day without water, dictating their futures, dreams and prospects. It is a great injustice that 1 in 9 people still live without access to clean water around the world, and I hope that by watching Brides of the Well more people will be inspired to help WaterAid in its mission to bring everyone clean water, decent toilets and good hygiene by 2030.”

Sanju Mewada, 18, has been collecting water since she was seven. The daily burden affected her education, forcing her to finish her studies early. Now WaterAid is bringing her water source closer to home and she is building her skills by working as part of a youth group to ensure her community water source is safe to drink.

“I used to travel 2.5km to collect water from the well each day. Sharp stones would pierce through my soles, and I developed a painful problem on my left side, but water is much more precious and important than my physical pain. For four months during the water shortages in the summers, I wouldn’t go to school at all. The youth group has ignited hope in me; gradually it will bring change in the community,” said Sanju.

Tim Wainwright, Chief Executive of WaterAid said: “For generations, women and girls have borne the brunt of the global water crisis, preventing them from reaching their full potential. Clean water is a human right that everyone, everywhere should enjoy. It is not only vital for health; it helps keep girls in school and frees women from the time spent collecting water and caring for sick children. By investing in clean water and decent sanitation, we are investing in future leaders. If we want girls to thrive, we must make clean water a global priority. Without it, we are in danger of missing our targets for many of the Sustainable Development Goals, including those on gender inequality and education. Urgent action is required by us all to make clean water a reality for everyone.” 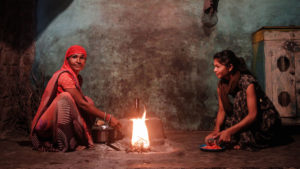 To watch Brides of the Well and find out more about WaterAid’s work to bring clean water, decent toilets and good hygiene to communities living in poverty around the world visit here.

WaterAid worked with visual storytelling agency Nucco Brain to bring the story to life, with creative input from Shekhar, and music composed by Yao Wang.

Shekhar Kapur and Parminder Nagra Launch Animation with WaterAid on Impact of Water Crisis on Girls added by newsroom on October 11, 2018
View all posts by newsroom →