SHANGHAI â€”Â Tourism Victoria and Ogilvy & Mather/Shanghai have rolled out their first campaign in mainland China to attract Chinese travellers to Melbourne and the state of Victoria.

Created by a cross-discipline team in Shanghai from O&M Advertising, OgilvyOne, Social@Ogilvy and Neo@Ogilvy, the integrated campaign consists of print ads, an online video and a Chinese-language website that showcases interactive 360-degree views of nine tourist hot spots in the city and state.

The series of three print ads juxtapose Victoriaâ€™s natural scenery, ranging from open vineyards and majestic limestone rock stacks, to Melbourneâ€™s cosmopolitan cityscape. The website shows an 80-second video spot featuring two young tourists, clad in their hotel bathrobes, as they go out to explore the art, architecture, music, history, food and nature that Melbourne has to offer â€“ all in a dayâ€™s time. Travelers can navigate through the interactive website to see panoramic views of nine main tourist attractions, including Sovereign Hill, the Crown Entertainment Complex, the Twelve Apostles lookout and beach walk, city streets, the laneways and heritage shopping areas, Federation Square, Ashcombe Maze and the vineyards.

â€œFor Chinese tourists, Melbourne – with its breathtaking natural scenery and a rich cultural heritage – may be one of the most untapped tourist destinations. Weâ€™ve geared up to change all that with this new campaign that invites Chinaâ€™s more sophisticated travelers to look beyond the usual tourist traps and explore the alternative adventures that are distinct to Melbourne,â€ said Debby Cheung, President of O&M Group/Shanghai.

The Hon. Louise Asher MLA, Minister for Tourism and Major Events, said, â€œThe new campaign for Melbourne and Victoria takes our cityâ€™s diverse elements and weaves them into an inviting tale that puts Melbourne on the map of Chinese travelers and really helps our city to stand apart from the crowd.â€

â€œOpen up to Moreâ€ will run in Tier 1 and select Tier 2 cities in mainland China through 2013. A social media component involving Chinese students in Melbourne will begin next year. 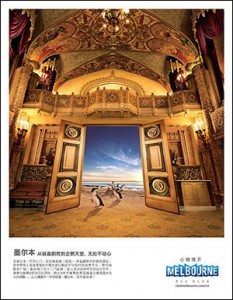