By newsroom on March 11, 2016Comments Off on UK mobile ad spend will surpass desktop in 2016 to account for 1-in-4 pounds spent on media

Mobile ad spend is set to surge 35 per cent compared to 12 months earlier and surpass desktop media investment to hit £4.58bn in 2016, and account for 27 per cent of total UK media budgets, according to eMarketer.

The research firm on March 10 released the numbers which show that the wider ‘digital’ category will continue to take the lion’s share of overall ad spend, generating 53 per cent of the total sum, which will surpass £9bn.

This is set to rise even further according to the forecast when in 2020 total digital spend will dwarf all others accounting for 60 per cent of the total £20.3bn spend.

Commenting on the numbers, report author, and eMarketer analyst, Will Fisher, said: “Ad spend tends to follow eyeballs, to a degree, and with mobile time accounting for an ever greater proportion of the average UK consumer’s media day, it’s little wonder that mobile ad spend has hit this milestone and is driving the digital total.”

Further analysis of the numbers reveals that mobile ad spend will surpass desktop for the first time in 2016. As mobile’s share of ad spend is forecast continues on a strong growth trajectory, desktop’s portion is expected to slowly decline, according to Fisher. 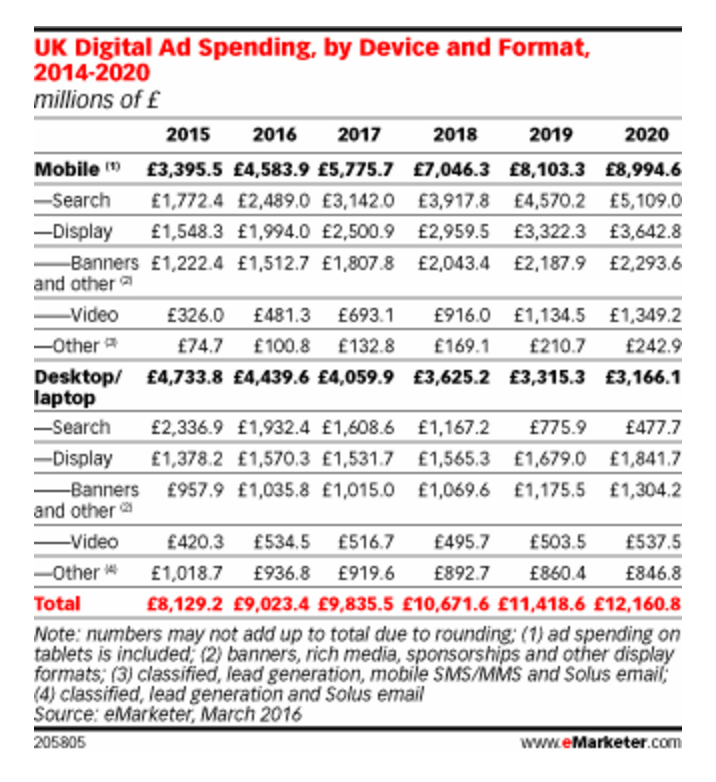 UK mobile ad spend will surpass desktop in 2016 to account for 1-in-4 pounds spent on media added by newsroom on March 11, 2016
View all posts by newsroom →